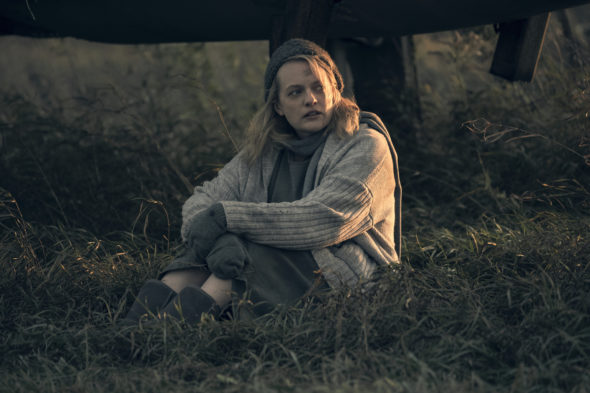 A Hulu drama based on the Margaret Atwood novel, The Handmaid’s Tale stars Elizabeth Moss, Joseph Fiennes, Yvonne Strahovski, Samira Wiley, Alexis Bledel, Max Minghella, Madeline Brewer, Ann Dowd, and O-T Fagbenle. The story centers on life under the totalitarian government of Gilead, which was formerly part of the U.S. The catastrophic state of the environment has devastated the birth rate, so fertile women have become a commodity enslaved by the ruling class.

Following its record-breaking season two premiere last week — which has already doubled its audience versus season one — Hulu has renewed the Emmy and Golden Globe Award-winning series The Handmaid’s Tale for a third season.

Since its premiere in April 2017, The Handmaid’s Tale has gone on to become the first series ever on a streaming video on-demand service to take both the Golden Globe and Emmy Award for Best Drama Series. The Handmaid’s Tale is an eight-time Emmy Award-winning drama series and has garnered more than 30 prestigious awards to date, including a 2018 Peabody Award.

Based on the award-winning, best-selling novel of the same name by Margaret Atwood, The Handmaid’s Tale became the most-viewed series debut on Hulu ever in its first week and has drawn acclaim from both fans and critics since its series premiere. Starring Elisabeth Moss, Joseph Fiennes, Yvonne Strahovski, Alexis Bledel, Madeline Brewer, Ann Dowd, O-T Fagbenle, Max Minghella, Samira Wiley, and Amanda Brugel, the series is created for television by Bruce Miller, who serves as the series’ showrunner. The Handmaid’s Tale is executive produced by Miller, Warren Littlefield, Daniel Wilson, Fran Sears, Ilene Chaiken and Elisabeth Moss. Margaret Atwood serves as a co-executive producer for season three of the series.

What do you think? Have you been streaming the second season of The Handmaid’s Tale TV series? Do you plan to check out season three when it debuts on Hulu? Let us know, below.

Please, bring back A Handmaid’s Tale! I am So hooked on this show!

Are there anymore episodes after 11 in Season 2??