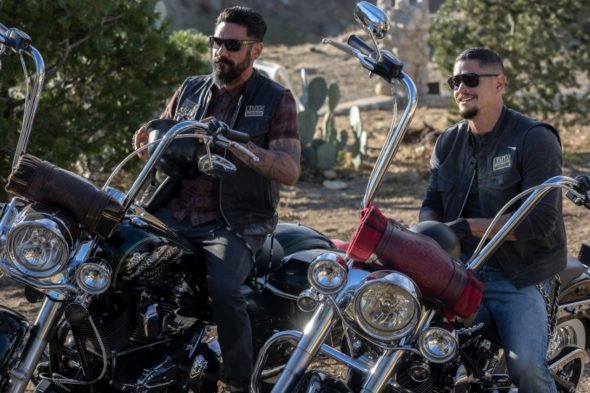 Is JD in over his head? Has the Mayans MC TV show been cancelled or renewed for a fourth season on FX? The television vulture is watching all the latest cancellation and renewal news, so this page is the place to track the status of Mayans MC, season four. Bookmark it, or subscribe for the latest updates. Remember, the television vulture is watching your shows. Are you?

Airing on the FX cable channel, the Mayans MC TV show stars JD Pardo, Clayton Cardenas, Edward James Olmos, Ray McKinnon, Carla Baratta, Danny Pino, Michael Irby, Raoul Max Trujillo, Richard Cabral, Emilio Rivera, Sarah Bolger, and Sulem Calderon. The story follows Ezekiel “EZ” Reyes (Pardo), a newly patched member of the Mayans M.C. charter on the Cali/Mexi border. Once the golden boy with the American Dream in his grasp, EZ and his brother Angel (Cardenas) are closer than ever after uncovering the truth behind their mother’s murder while their father Felipe (Olmos) struggles to reconcile the choices he and his sons have made. After United States Assistant District Attorney Lincoln Potter (McKinnon) threatens to deport Felipe, EZ and Angel chose to leverage incriminating information to protect him rather than to free rebel leader Adelita (Baratta) from federal custody, leaving her to give birth to Angel’s son while in handcuffs. Meanwhile, Miguel Galindo (Pino) is left reeling over the loss of his mother to an apparent suicide, while others quietly suspect foul play. Additionally, the Mayans seek vengeance on their rivals, the Tijuana M.C. Vatos Malditos, after a surprise attack on their club. When the smoke clears, they discover the body of a Sons of Anarchy Motorcycle Club Redwood Original – there will be hell to pay.

The third season of Mayans MC averaged a 0.24 rating in the 18-49 demographic and 751,000 viewers. Compared to season two, that’s down by 38% in the demo and down by 30% in viewership. Find out how Mayans MC stacks up against other FX TV shows.

Will FX cancel or renew Mayans MC for season four? In the past, the series has been one of FX’s top-rated series. However, 16 months have passed since the end of season two and series co-creator Kurt Sutter was fired from the series. Those two factors may hurt the ratings but I suspect the show will still be renewed. I’ll update this page with breaking developments. Subscribe for free alerts on Mayans MC cancellation or renewal news.

5/4/21 update: Mayans MC has been renewed for a fourth season on FX.

What do you think? Are you glad that the Mayans MC TV show has been renewed for a fourth season? How would you feel if FX had cancelled this TV series, instead?

love the show cant wait for it to come back

I usually don’t watch these type of shows but I am hooked on this series.

I luv luv luv this show, please don’t cancel it.

That was a great ending last night