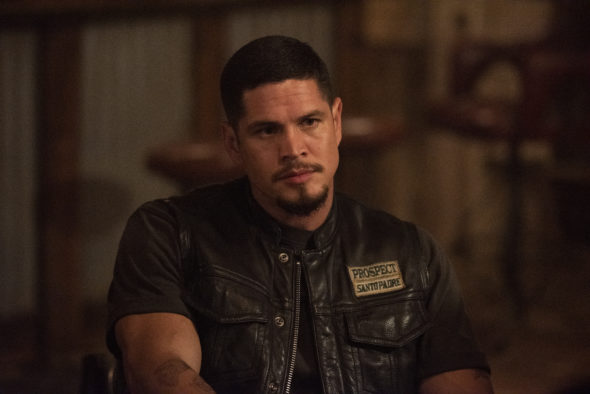 Does this motorcycle club have more gas in the tank? Is the Mayans MC TV show cancelled or renewed for a third season on FX? The television vulture is watching all the latest cancellation and renewal news, so this page is the place to track the status of Mayans MC season three. Bookmark it, or subscribe for the latest updates. Remember, the television vulture is watching your shows. Are you?

A Sons of Anarchy spin-off airing on the FX network, Mayans MC stars JD Pardo, Clayton Cardenas, Edward James Olmos, Sarah Bolger, Michael Irby, Carla Baratta, Antonio Jaramillo, Raoul Max Trujillo, Richard Cabral, and Danny Pino. This next chapter in Kurt Sutter’s saga centers on Ezekiel “EZ” Reyes (Pardo), a prospect in the Mayans M.C. charter on the Cali/Mexi border. He is trying to mend fences with his brother “Angel” (Cardenas) while searching for the truth behind their mother’s death. Meanwhile, their father, Felipe (Olmos) wants his sons to walk the straight and narrow path.

The second season of Mayans MC averaged a 0.39 rating in the 18-49 demographic and 1.07 million viewers. Compared to season one, that’s down by 38% and 33%, respectively. Find out how Mayans MC stacks up against the other FX TV shows.

Will FX cancel or renew Mayans MC for season three? This show was one of FX’s highest-rated shows last season and remains so. I don’t see it ending anytime soon, despite Sutter being fired. I’ll still keep a hungry eye on the ratings and my ear to the ground for developments. Subscribe for free Mayans MC cancellation or renewal alerts.

What do you think? Are you glad that the Mayans MC TV show has been renewed for a third season? How would you feel if FX had cancelled this TV series, instead?

I’m like everybody else I hope they don’t cancel my ends I watch Mayans in fear The walking Dead I don’t know what happened to the last part of this last season it’s like it didn’t finish out.it kind of angers me even like on another station where you watch something from the beginning and then you have to pay to finish watching it on some other station or what’s his extra little net worth things that people are charging you for it’s not right so I hope they keep Mayans going I hope they keep it on FX and… Read more »

Ready for season three come on. Don’t cancel it we love it.

I love this show please don’t cancel it!!

love this show. Don’t cancel it.

one of few reasons watch FX like the show Mayans

Love this show and sons of anarchy !

We’re glad it’s renewed. Can’t wait til season 3. We would have been bummed if it was cancelled.

News reports say The Mayans have been renewed.

So can anyone tell me the date it will start

I hope it continues, I love this show.

I really hope Mayans mc keeps going there is so much more to learn and explore especially if Miguel learns he’s a Reyes not a Galindo and what is going to happen to Dita ??????????

I totally agree with you Devilwoman! There has to be more to this story to consider making a season 3. I pray the Mayans MC keeps going. Love the show and all the characters. Hope they kill Potter off though!

If this show gets cancelled , i will stop watching any new show until that that shows gets till like season 3-5 , its BS, walking dead gets 10 seasons, i still watch it but Mayans is better, its better than most shows. there have a decent bunch of new shows cancelled , and i wanna a show that go to mutli seasons, a full story.