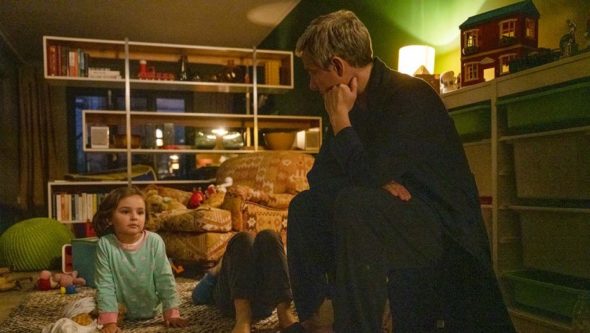 Can Paul and Ally survive parenthood with their sanity intact? Has the Breeders TV show been cancelled or renewed for a second season on FX? The television vulture is watching all the latest cancellation and renewal news, so this page is the place to track the status of Breeders, season two. Bookmark it, or subscribe for the latest updates. Remember, the television vulture is watching your shows. Are you?

Airing on the FX cable channel, Breeders stars Martin Freeman, Daisy Haggard, George Wakeman, Jayda Eyles, Stella Gonet, Joanna Bacon, Alun Armstrong, Patrick Baladi, Tim Steed, and Michael McKean. The show explores the paradox that every parent knows but will never admit — you would willingly die for your children, but quite often you also want to kill them. Paul (Freeman) is a caring father who’s in the process of discovering that he’s not quite the patient man that he thought he was. His parenting partner is Ally (Haggard). She’s a nurturing mother, a loving wife, a loyal daughter, and a skilled businesswoman but sometimes, something out of her control throws everything out of whack. Paul and Ally juggle full-time careers, aging parents, a mortgage, upheavals in their relationship, and the unenviable curveballs of parenting their young children — anxious seven-year-old Luke (Wakeman) and Ava (Eyles), a happy and spirited four-year-old.

The first season of Breeders averaged a 0.09 rating in the 18-49 demographic and 237,000 viewers. Find out how Breeders stacks up against other FX TV shows.

Will FX cancel or renew Breeders for season two? This series seems relatively inexpensive to produce and is part of Disney’s focus on making additional content for FX and integrating it with Hulu. I think this show will be renewed. I’ll update this page with breaking developments. Subscribe for free alerts on Breeders cancellation or renewal news.

5/18/20 update: Breeders has been renewed for a second season on FX.

What do you think? Are you glad that the Breeders TV show has been renewed for a second season? How would you feel if FX had cancelled this TV series, instead?

Yes! Please renew for many seasons! Love the actors, characters, everything!