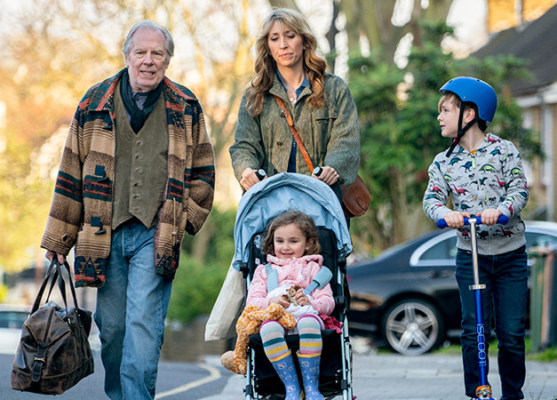 The comedy series explores the paradox that every parent knows but will never admit — you would willingly die for your children, but quite often you also want to kill them. The cast includes Martin Freeman, Daisy Haggard, George Wakeman, Jayda Eyles, Stella Gonet, Joanna Bacon, Alun Armstrong, Patrick Baladi, Tim Steed, and Michael McKean.

The first season of Breeders averages a 0.09 rating in the 18-49 demographic and 237,000 viewers. While not the highest ratings, FX has decided to give Breeders a second chance.

Breeders returns for a second series

Sky original Breeders, the honest and uncompromising comedy about the challenges of parenthood, starring Martin Freeman (Fargo, Sherlock, Black Panther) and Daisy Haggard (Back To Life, Episodes, Black Mirror), has been renewed for a second series. The acclaimed first series is currently available on demand on Sky One and on streaming service NOW TV.

Sky original Breeders is produced by Avalon and FX Productions for Sky and FX Networks. The first series has gained widespread critical acclaim:

“beyond comedy and towards something rare…Writers Simon Blackwell, Chris Addison and Freeman himself have given us not only a couple we can honestly believe in but also a drama for modern times” The Observer

“Freeman and Haggard immediately gel as a finely tuned double act playing off each other with exquisite timing.” – ????” Mail on Sunday

“A hilariously no-holds-barred look at the real challenges of parenting in the contemporary world… beautifully observed and very funny – ?????.” Heat Magazine

Breeders is one of the latest in a run of original comedies launching on Sky One with audiences of more than one million – including Avenue 5 (Starring Hugh Laurie), Intelligence (with Nick Mohammed and David Schwimmer), Hitmen (Mel Giedroyc and Sue Perkins) and Code 404 (Daniel Mays, Stephen Graham and Anna Maxwell Martin).

Jon Mountague, Director of Comedy, Sky Studios, said: “With scripts of this calibre, hilarity and honesty, and a cast lead by the uniquely relatable Martin Freeman and Daisy Haggard, it’s no surprise Breeders struck such a huge chord with viewers. Hats off to Simon Blackwell, Chris Addison and the team – we can’t wait to give birth to a second series.”

Martin Freeman commented: “So pleased we get another go at Breeders. I reckon the next one will be even better. It’s such a pleasure working with this team… we’ll see you all soon. Well, not soon. But at some point, honest.”

Chris Addison said: “We’re absolutely thrilled that Sky and FX have decided to let us torture Paul and Ally a bit more with another season of parenting trauma. That’s entirely because we’ve got more of the story we’re excited to tell and definitely not just because it’s basically free therapy for us. I flatly deny that.”

Simon Blackwell added: “It was a thrill to be able to make the first season of Breeders – Sky, FX, our production team, crew and amazing cast made it a fantastic creative experience. So to be able to explore even more parental struggles in series 2 is the icing on a cake that we’ve checked carefully for any possible trace of peanuts.”

In Breeders, Martin Freeman stars as Paul, a caring father discovering he’s not quite the man he thought he was. His partner in this impossibly steep parental climb is Ally (Daisy Haggard), who runs a recording studio, makes Paul laugh and has the ability to read a story to their children while she’s technically asleep.

In the first series, Paul and Ally are juggling fulltime careers, aging parents, a mortgage, upheavals in their relationship and the unenviable curveballs of parenting their young children, Luke (George Wakeman) and Ava (Jayda Eyles). When Ally’s estranged father Michael (Michael McKean) appears on their doorstep, the family essentially takes on a third child, but this one comes with baggage and opinions. Paul’s own parents, Jackie (Joanna Bacon) and Jim (Alun Armstrong), are on hand to help out, but their generation does parenting a little differently… .”

What do you think? Have you seen Breeders? Will you watch season two?

GREAT NEWS , i love this show, its perhaps one of the most realistic shows about family/ couples / parenting in a comedy ever.wish the season was longer .

Oh heck YES, I will watch season two! Not a parent, but some how I can relate. Season One was a laugh riot! GREAT call FX in renewing for another season!