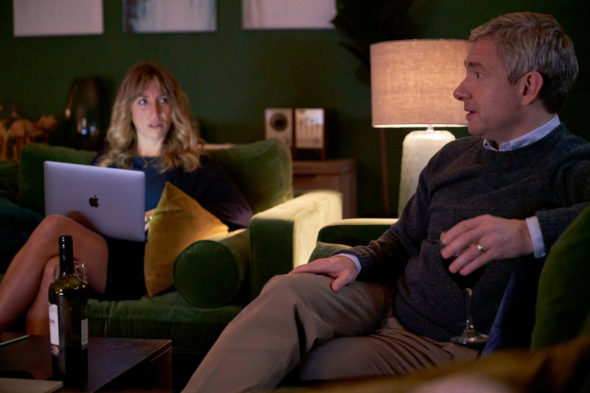 Can Paul and Ally’s relationship survive the second season of the Breeders TV show on FX? As we all know, the Nielsen ratings typically play a big role in determining whether a TV show like Breeders is cancelled or renewed for season three. Unfortunately, most of us do not live in Nielsen households. Because many viewers feel frustration when their viewing habits and opinions aren’t considered, we invite you to rate all of the second season episodes of Breeders here.  *Status Update Below.

An FX dark comedy series, the Breeders TV show stars Martin Freeman, Daisy Haggard, Alex Eastwood, Eve Prenelle, Joanna Bacon, Alun Armstrong, and Stella Gonet. The show explores the paradox that every parent knows but will never admit — you would willingly die for your children, but quite often you also want to kill them. Paul (Freeman) is a caring father who discovers that he’s not quite the patient man that he thought he was. His parenting partner is Ally (Haggard), a nurturing mother, loving wife, and a skilled businesswoman who has everything under control until it’s not. In season two, son Luke (Eastwood) is now 13 years old and daughter Ava (Prenelle) is 10, serving up brand new challenges for their parents. Luke’s increasing anxiety and Ava’s growing independence add some new and uncharted complications into the existing chaotic mix of stretched resources, lack of time, and the fine art of winging it while looking like you know what you’re doing. Paul’s parents, — Jackie (Bacon) and Jim (Armstrong) are older too, as is Ally’s mother Leah (Gonet), leading Paul and Ally to find that they now have to parent the generation above them as well as the generation below.

What do you think? Which season two episodes of the Breeders TV series do you rate as wonderful, terrible, or somewhere between? Do you think that Breeders should be cancelled or renewed for a third season on FX? Don’t forget to vote, and share your thoughts, below.

This is a great show! Straight real parenting it’s not all mushy and fake but the reality of parenting