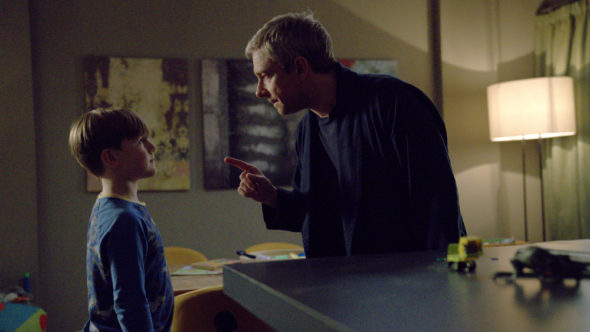 Who’s really in charge in the first season of the Breeders TV show on FX? As we all know, the Nielsen ratings typically play a big role in determining whether a TV show like Breeders is cancelled or renewed for season two. Unfortunately, most of us do not live in Nielsen households. Because many viewers feel frustration when their viewing habits and opinions aren’t considered, we invite you to rate all of the first season episodes of Breeders here. *Status update below.

An irreverent and honest comedy series on FX, Breeders stars Martin Freeman, Daisy Haggard, George Wakeman, Jayda Eyles, Stella Gonet, Joanna Bacon, Alun Armstrong, Patrick Baladi, Tim Steed, and Michael McKean. The show explores the paradox that every parent knows but will never admit — you would willingly die for your children, but quite often you also want to kill them. Paul (Freeman) is a caring father who’s in the process of discovering that he’s not quite the patient man that he thought he was. His parenting partner is Ally (Haggard). She’s a nurturing mother, a loving wife, a loyal daughter, and a skilled businesswoman but sometimes, something out of her control throws everything out of whack. Paul and Ally juggle full-time careers, aging parents, a mortgage, upheavals in their relationship, and the unenviable curveballs of parenting their young children — anxious seven-year-old Luke (Wakeman) and Ava (Eyles), a happy and spirited four-year-old.

What do you think? Which season one episodes of the Breeders TV series do you rate as wonderful, terrible, or somewhere between? Do you think that Breeders should be cancelled or renewed for a second season on FX? Don’t forget to vote, and share your thoughts, below.

I was totally disappointed in this series, how mentally abusive these parents are while dealing with their children! It’s not funny, and very upsetting to think others will see this as normal!

We love this family and want more ❤️