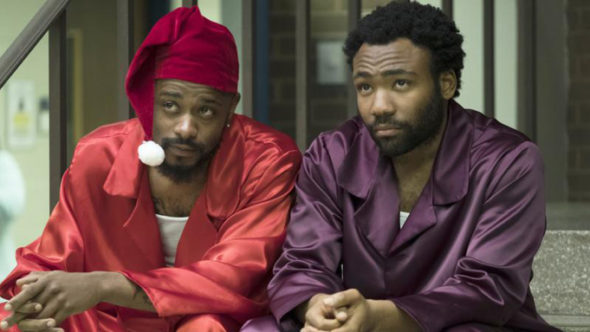 Fans of the Atlanta TV show don’t have to worry about the FX TV series being cancelled any time soon. Unfortunately, they’ll also have to wait quite a while before this comedy series returns. Back in June 2018, FX renewed Atlanta for a third season and the channel has now ordered a fourth season as well.

Unfortunately, both seasons of eight episodes won’t go into production until Spring 2020 so we likely won’t see new episodes for at least a year (which is later than previously expected). Season two finished airing in May 2018.

Production of Seasons 3 and 4 Begins Next Spring

LOS ANGELES, August 6, 2019 – FX has ordered a fourth season of its Emmy(R) and Golden Globe(R) award-winning hit comedy series Atlanta, it was announced today by Eric Schrier, President, FX Entertainment. Production of seasons three (previously ordered on 6/7/18) and four – both eight episodes each – are scheduled to begin next spring.

“What more can be said about Atlanta than the critical acclaim and accolades that Donald, Paul, Dianne, Stephen and Hiro have earned for two exceptional seasons of what is clearly one of the best shows on television,” said Schrier. “This group of collaborators and cast have created one of the most original, innovative stories of this generation and we are proud to be their partners.”

The second season, Atlanta Robbin’ Season, was hailed as the best show on television. In Atlanta Robbin’ Season, two cousins work through the Atlanta music scene in order to better their lives and the lives of their families. “Earn Marks” (Donald Glover) is a young manager trying to get his cousin’s career off the ground. “Alfred Miles” (Brian Tyree Henry) is a new hot rapper trying to understand the line between real life and street life. “Darius” (Lakeith Stanfield) is Alfred’s right-hand man and visionary. “Van” (Zazie Beetz) is Earn’s best friend and the mother of Earn’s daughter.

ABOUT FX
FX is the flagship general entertainment basic cable channel of FX Networks. Launched in June of 1994, FX is carried in 87 million homes. The diverse schedule features a growing roster of critically-acclaimed and award-winning hit dramas series including Taboo, Legion, Snowfall, Trust, Pose, Mayans M.C. and the upcoming Y; the critically-acclaimed limited series American Horror Story, Fargo, American Crime Story, FEUD, Fosse/Verdon and the upcoming Devs, Shogun, Mrs. America and A Teacher; acclaimed hit comedy series including Atlanta, Baskets, Better Things, What We Do in the Shadows and the upcoming Breeders; the half-hour series Mr Inbetween; the upcoming docuseries The Weekly with The New York Times; and the upcoming special A Christmas Carol. FX is the former home of the critically-acclaimed and award-winning hit drama series The Shield, Nip/Tuck, Rescue Me, Damages, Sons of Anarchy, Justified and The Americans. The network’s library of acquired box-office hit movies is unmatched by any ad-supported television network.

What do you think? Have you watched the Atlanta TV show on FX? Do you plan on watching seasons three and four?