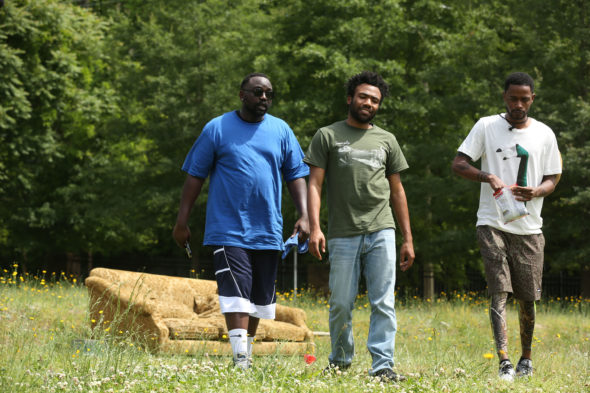 After a between-season hiatus long enough to make it seemed cancelled, FX has finally announced the release date for the second season of its Atlanta TV show. Atlanta Robbin’ Season, aka Atlanta season two premieres on FX on Thursday, March 1, 2018, at 10:00pm ET/PT.

An FX comedy-drama, Atlanta stars Donald Glover, Brian Tyree Henry, Lakeith Lee Stanfield, and Zazie Beetz. The series follows two cousins who work through the Atlanta, Georgia music scene as they try to better their lives and the lives of their families.

Today, FX also announced the sixth and final season premiere of The Americans, as well as the Trust TV series premiere.

“Earn Marks” (Donald Glover) is a young manager trying to get his cousin’s career off the ground. “Alfred Miles” (Brian Tyree Henry) is a new hot rapper trying to understand the line between real life and street life. “Darius” (Lakeith Lee Stanfield) is Alfred’s right-hand man and visionary. “Van” (Zazie Beetz) is Earn’s best friend and the mother of Earn’s daughter.

What do you think? Have you been waiting for the second season premiere of the Atlanta TV series? Do you plan to check out the debut on FX? Let us know, below.