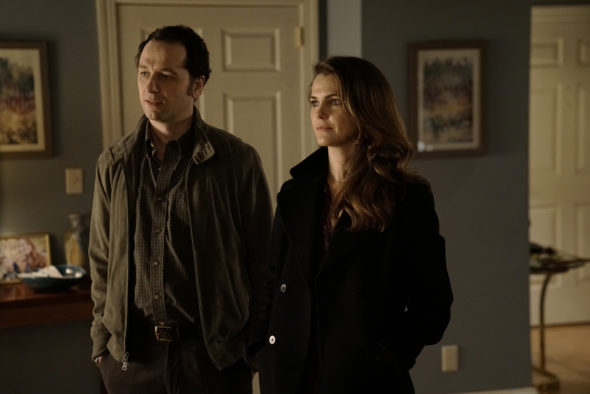 The Russian spies return. FX has announced The Americans season six premieres on Wednesday, March 28, 2018, at 10:00pm ET/PT. This is the beginning of the end for Elizabeth and Philip, since FX announced season six would be the final outing, when it renewed it, back in May of 2016.

Check out this excerpt from the FX press release to learn more.

The Americans will premiere its sixth and final season on Wednesday, March 28, 2018, at 10 PM ET/PT on FX. The Americans is a period drama about the complex marriage of two KGB spies posing as Americans in suburban Washington D.C. during the Reagan administration.

The arranged marriage of Philip (Matthew Rhys) and Elizabeth Jennings (Keri Russell) grows more passionate and genuine by the day, but as the pressures and demands of the job grow heavier, the personal toll becomes almost too exhausting to bear. Having revealed their true identities to their teenage daughter Paige (Holly Taylor), Philip and Elizabeth’s ability to protect their cover and their family’s safety deteriorates.

After a particularly fraught mission, Philip and Elizabeth decide to end their tour and take their family home to Russia. However, a game-changing development in one of their ongoing cases forces them to abandon those plans for the sake of the motherland. Now, Paige delves deeper into the family business, even as Philip takes a step back from it. The Jennings struggle to maintain a smokescreen of normalcy, especially around their son, Henry (Keidrich Sellati), who remains blissfully ignorant of the spies in his midst.

With Gorbachev in power in the Soviet Union, the winds of change are sweeping through both Russia and America, creating new perils. A growing rift within the KGB draws disillusioned former officer Oleg Burov (Costa Ronin) back into the fray, and may set Philip and Elizabeth on opposing sides as the Cold War reaches its boiling point.

The Americans was created by Joe Weisberg who, along with Joel Fields, serves as an Executive Producer and Writer. Graham Yost, Chris Long, Stephen Schiff and Mary Rae Thewlis are also Executive Producers, along with Amblin Television heads Justin Falvey and Darryl Frank, and Joshua Brand is Consulting Producer. The Americans is produced by Fox 21 Television Studios and FX Productions.

What do you think? Are you still watching The Americans TV series? Is the FX TV show ending at the right time? If it were up to you, would The Americans be cancelled or renewed for season seven? Tell us.

USED TO BE my favorite show. The acting/direction was SUPERB! The new model of YUGE amount of time between seasons has RUINED many shows, but not as much as this one. WHAT ARE YOU THINKING? This show needs a reboot not an ending. The OBVIOUS answer to me is for Phil and Elizabeth to become DOUBLE AGENTS. This would give this show new life.

DON”T END THE SHOW! Bring them back as DOUBLE AGENTS.

Time flies! Since this premiered I’ve been saving it to watch as I didn’t anticipate it would run for so long!

They had a good run. Time to call it a day.

This show will be sadly missed. The acting and the story line are intriguing and brilliant!