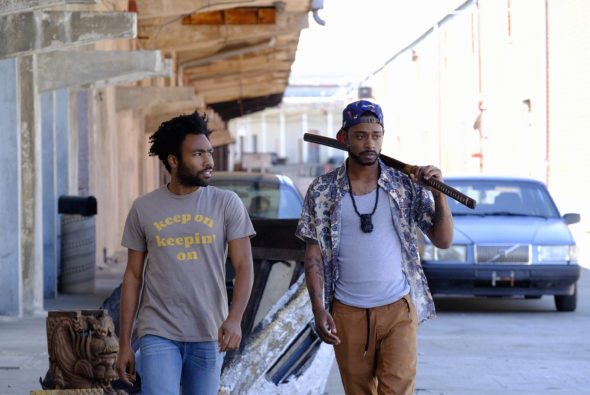 Will we ever again see Earns Marks and his cousin, Alfred? Has the Atlanta TV show been cancelled or renewed for a second season on FX? The television vulture is watching all the latest cancellation and renewal news, so this page is the place to track the status of Atlanta, season two. Bookmark it, or subscribe for the latest updates. Remember, the television vulture is watching your shows. Are you?

Airing on the FX cable channel, Atlanta stars Donald Glover, Brian Tyree Henry, Lakeith Lee Stanfield, and Zazie Beetz. The series follows two cousins who work through the Atlanta, Georgia music scene as they try to better their lives and the lives of their families.

The first season of Atlanta averaged a 0.44 rating in the 18-49 demographic and 888,000 viewers. Find out how Atlanta stacks up against the other FX TV shows.

We don’t have to worry that FX will cancel Atlanta. Despite the long break between seasons, the network renewed it for a second season back in September of 2016. Now, FX has announced Atlanta, season two, premieres on March 1st. Get the details here, while I seek supper somewhere else. Subscribe for free alerts on any Atlanta cancellation or renewal news.

What do you think? Did you think the Atlanta TV show would be renewed for a second season? How would you feel, had FX cancelled this TV series, instead?