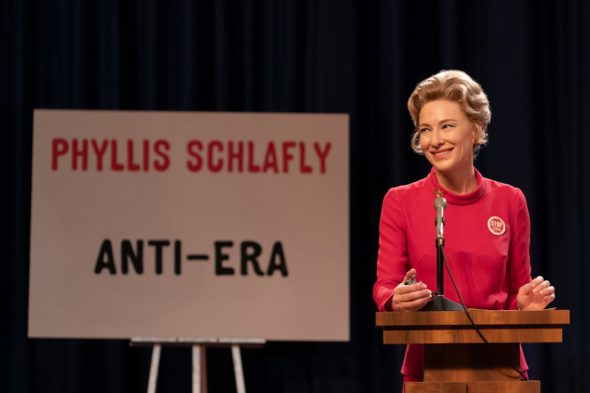 How illuminating will the first season of the Mrs. America TV show be on FX on Hulu? As we all know, the Nielsen ratings typically play a big role in determining whether a TV show like Mrs. America is cancelled or renewed for season two (we already know that this is a mini-series). Hulu and other streaming platforms, however, collect their own data. If you’ve been watching this TV series, we’d love to know how you feel about the first season episodes of Mrs. America here.

An FX on Hulu historical drama series, Mrs. America stars Cate Blanchett, Rose Byrne, Uzo Aduba, Elizabeth Banks, Kayli Carter, Ari Graynor, Melanie Lynskey, Margo Martindale, John Slattery, Jeanne Tripplehorn, Tracey Ullman, and Sarah Paulson. The show tells the story of the movement to ratify the Equal Rights Amendment (ERA) and the unexpected backlash that was led by a conservative woman named Phyllis Schlafly (Blanchett), aka “the sweetheart of the silent majority.” The story is told through the eyes of the women of the era – both Schlafly and second-wave feminists like Gloria Steinem (Byrne), Betty Friedan (Ullman), Shirley Chisholm (Aduba), Bella Abzug (Martindale), and Jill Ruckelshaus (Banks). The series explores how one of the toughest battlegrounds in the culture wars of the 1970s helped give rise to the Moral Majority and forever shifted the political landscape.

What do you think? Which season one episodes of the Mrs. America TV series do you rate as wonderful, terrible, or somewhere between? Do you think that Mrs. America on FX on Hulu should have been renewed for a second season? Don’t forget to vote, and share your thoughts, below.