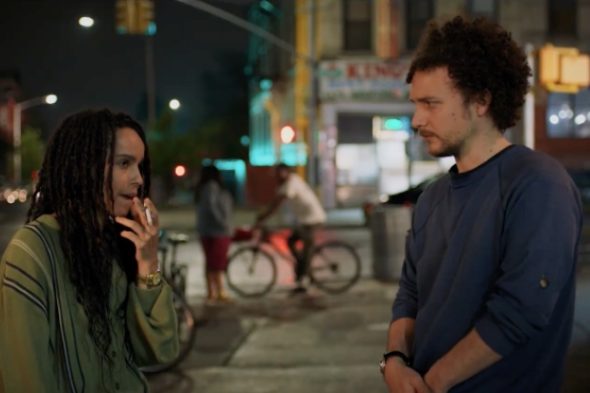 Will viewers want to revisit Rob’s past with her in the first season of the High Fidelity TV show on Hulu? As we all know, the Nielsen ratings typically play a big role in determining whether a TV show like High Fidelity is cancelled or renewed for season two. Hulu and other streaming platforms, however, collect their own data. If you’ve been watching this TV series, we’d love to know how you feel about the first season episodes of High Fidelity here. *Status update below.

A Hulu comedy which is a departure from Nick Hornby’s 1995 novel and 2000 film, the High Fidelity TV series stars Zoë Kravitz, Da’Vine Joy Randolph, David H. Holmes, Jake Lacy, and Kingsley Ben-Adir. This story centers on Rob Brooks (Kravitz). She’s the ultimate music fan and a female record store owner in the rapidly gentrified neighborhood of Crown Heights, Brooklyn. Rob revisits past relationships through music and pop culture while trying to get over her one true love.

What do you think? Which season one episodes of the High Fidelity TV series do you rate as wonderful, terrible, or somewhere between? Do you think that High Fidelity on Hulu should be cancelled or renewed for a second season? Don’t forget to vote, and share your thoughts, below.

*8/7/20 update: High Fidelity has been cancelled by Hulu so there won’t be a second season.