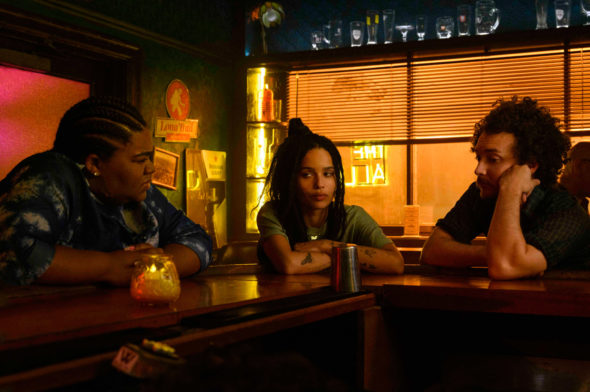 TV show description:
A departure from Nick Hornby’s 1995 novel and the 2000 film, the High Fidelity TV series centers on Rob Brooks (Kravitz). She’s the ultimate music fan and a female record store owner in the rapidly gentrified neighborhood of Crown Heights, Brooklyn. Rob revisits past relationships through music and pop culture while trying to get over her one true love.

After a first date and hookup gone wrong with a nice guy named Clyde (Lacy), Rob goes into an emotional tailspin in which she recounts the ups and downs of her All-Time Top Five Most Memorable Heartbreaks.

At the store, Rob’s helped by Cherise (Randolph) and Simon (Holmes), who also craft their own Top Five lists.

Series Finale:
Episode #10 — The Other Side of the Rock
Rob reflects on the night of her birthday, where we learn she finally got clarity on her feelings about Mac. Cam and Nikki’s baby finally arrives, prompting Rob to finally take a chance and go after what, or whom, she really wants. In going out of her comfort zone, and seeking to right some wrongs, maybe she can let go and finally stop her past from messing up her present. Meanwhile, a surprising gesture sets Cherise on a path to make her own music.
First aired: February 14, 2020.

What do you think? Do you like the High Fidelity TV show? Do you think it should have been cancelled or renewed for a second season?