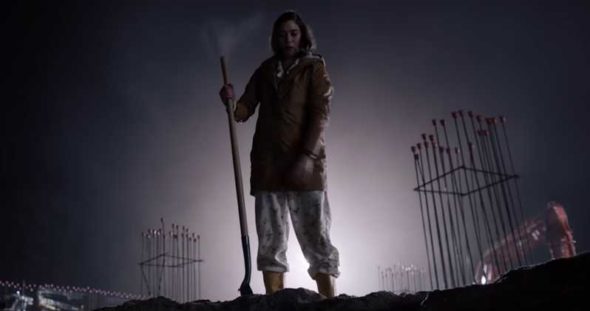 Who will survive in the second season of the Castle Rock TV show on Hulu? As we all know, the Nielsen ratings typically play a big role in determining whether a TV show like Castle Rock is cancelled or renewed for season three. Hulu and other streaming platforms, however, collect their own data. If you’ve been watching this TV series, we’d love to know how you feel about the second season episodes of Castle Rock here.  *Status Update Below.

A Hulu thriller anthology series, Castle Rock is based on the writings of Stephen King, is set in the “Stephen King multiverse” and unfolds in a fictional town in Maine. The second season stars Lizzy Caplan, Paul Sparks, Barkhad Abdi, Yusra Warsama, Elsie Fisher, Matthew Alan, and Tim Robbins. A feud between warring clans — the Merrills and the Somali community — comes to a boil when budding psychopath Annie Wilkes (Caplan) gets waylaid in Castle Rock.

What do you think? Which season two episodes of the Castle Rock TV series do you rate as wonderful, terrible, or somewhere between? Do you think that Castle Rock on Hulu should be cancelled or renewed for a third season? Don’t forget to vote, and share your thoughts, below.

*11/5/20 update: Castle Rock has been cancelled by Hulu so, there won’t be a third season.

One of the best series Ive seen. Spreading the word. Please bring on season 3, 4. 5. Etc…