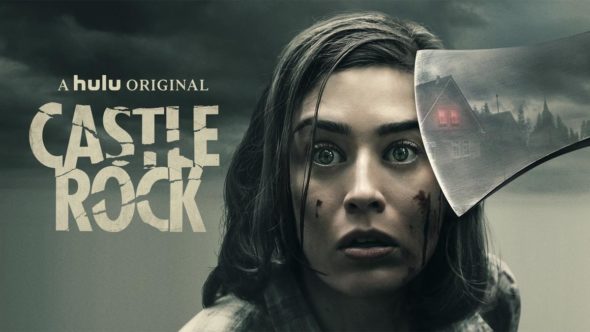 Do viewers want more of this “cockadoodie” series? Has the Castle Rock TV show been cancelled or renewed for a third season on Hulu? The television vulture is watching all the latest cancellation and renewal news, so this page is the place to track the status of Castle Rock, season three. Bookmark it, or subscribe for the latest updates. Remember, the television vulture is watching your shows. Are you?

Streaming on the Hulu platform, Castle Rock is based on the writings of Stephen King, is set in the “Stephen King multiverse” and unfolds in a fictional town in Maine. The second season stars Lizzy Caplan, Paul Sparks, Barkhad Abdi, Yusra Warsama, Elsie Fisher, Matthew Alan, and Tim Robbins. A feud between warring clans — the Merrills and the Somali community — comes to a boil when budding psychopath Annie Wilkes (Caplan) gets waylaid in Castle Rock.

Will Hulu cancel or renew Castle Rock for season three? Hulu, like the other streaming services, capture their own viewing data so, unless they choose to release that information, it’s difficult to gauge where a series is a success or not. For what it’s worth, my hungry gut tells me Castle Rock will be renewed. I’ll update this page with breaking developments. Subscribe for free alerts on Castle Rock cancellation or renewal news.

What do you think? Were you hoping that the Castle Rock TV show would be renewed for a third season? Are you sorry that Hulu cancelled this TV series, instead?

Folks, I honestly don’t believe that the networks execs read any of these comments. They could give two craps whether you beg for it to be continued or not! All they care about is the bottom line, and it doesn’t matter if you’ve invested two or three years of your life into a show, they pull it out from under you without a second thought.

One of the networks needs to grab this series fast!!! It’s the best I’ve seen so far . It’s intense and exciting and how the characters get weaved through each season. I loved season two it was perfect and explained so much about Annie from Misery. She played that part perfect, Kathy Bates would be proud. I also hope they bring Joy back I loved her character and the ending was so sad. All the characters in season 1 and 2 did such awesome jobs. This has to be an ongoing series, dirty birds, I’M HIS NUMBER ONE FAN

I thought the way this show told the story was a masterpiece. I would like to see it continued, but I am not sure where the story would go from here.
I think it would be interesting to go on the way American Horror Story did. There are so many creepy towns from Stephen King. Be nice to use. Some of same actors over. Bill Scarsgard plays the devil in Castlerock and his older brother played devil in The Stand. Creepy, but maybe Alexander could do something in this series as well.

I hope they change their minds or someone else picks it up!! I love this show!

I love this show and have watch both seasons twice! I really hope Hulu brings us season three.

PLEASE bring back this series! It was addictive!

Please bring this series back, I love it and want more!

Please bring castle rock back for a 3rd season. This was a great show. I love it!!!

I am a DIE HARD Master of Horror, King fan. Totally loved the Castle Rock series and would of course, love to see another season.

I loved the show. I’m a Stephen King fan. Hope it gets renewed for Season 3.