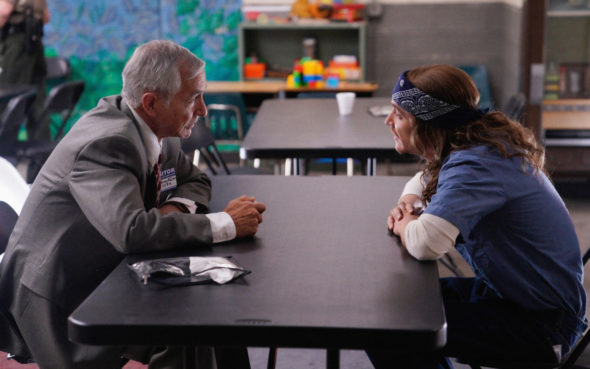 The Interrogation room is empty. The CBS All Access series has been cancelled so there will not be a second season of the non-linear drama. The first season stars Peter Sarsgaard, David Strathairn, and Kodi Smit-McPhee and follows a man who was charged and convicted of brutally murdering his mother.

The experimental CBS All Access drama’s episodes could be viewed in any order by viewers, and the second season would have followed a completely new case. The drama landed in January, and it is only the fourth scripted series to be cancelled by the steaming service, following Tell Me a Story, One Dollar, and Strange Angel.

Julie McNamara, exec vp and head of programming at CBS All Access, said the following about Interrogation, per The Hollywood Reporter:

“Anders Weidemann, John Mankiewicz and Fabrik Entertainment’s unique approach to exploring an unsolved true-crime in Interrogation allowed the audience to follow their own investigative path of evidence and suspecting characters throughout a 10-episode arc. They led an amazing team of writers, directors and cast, all of whom delivered a close-ended season that will continue to be available on CBS All Access for new viewers to discover and enjoy.”

What do you think? Did you watch season one of Interrogation on CBS All Access? Did you want a second season of this drama?

This was an awesome series. So sad there is not going to be a season 2. This was truly a unique experience for viewers..

I am watching this right now for the first time and I read this ! Wtf !

everytime i love a serie , it is cancelled.
People only love rubbish ones….