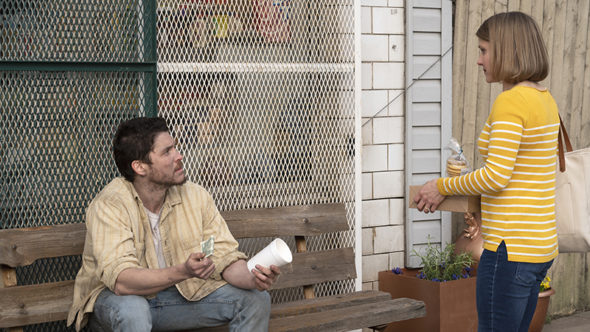 CBS All Access is cashing out. According to The Hollywood Reporter, the streaming service has cancelled One Dollar after only one season.

While One Dollar won’t be coming back for another season, we’re incredibly proud of its artistically presented 10-episode story, which will continue to be available for streaming on the service and for future audiences to discover. We thank the tremendous creative team, Craig Zobel, Matt DeRoss, Alexandre Dauman, Graham Gordy and Jason Mosberg, and the wonderful cast for their hard work and dedication to this series, as well as our viewers for following One Dollar‘s journey.”

What do you think? Have you seen One Dollar? Would you have watched a second season?

I came across One Dollar, during the pandemic and I’m sad to learn that there’s no second season…Bring it back!! PLEASE….

I really enjoyed the show. Wish it had more than one season

Absolutely I would’ve followed the 2nd season!!
Why would this be cancelled?????

I just finished watching the series. I am so disappointed to hear it was not renewed. I’d love to them bring it back for another season or do a spin off show with Leslie’s character.

Loved One Dollar, best show I’ve seen in a long time. Super sad you cancelled it!

Best show And well done Coundnt wait for next episode

I loved season 1, not happy that it’s not going on. It was intriguing with the dollar

Great Show!!! How can it not be renewed?

Hell yes I would have watched One Dollar for another season. Why did CBS let it die? I never saw any advertising for it…possibly the name confused people. The writing was great and the cast was fantastic!!! CBS should reconsider their decision!!!

Love this show. Hate to see it go… But that what seems to happen with the good ones…come back one dollar. I got time to spend with you.

I thought it was a good mystery with a decent plot. The characters were funny and interesting. I would have loved to see a season 2.

Should have been renewed, better than average

One dollar was better than average. Should have been renewed.

I’m so tired of finding shows I like and get into only to find out it’s canceled!!!

Sorry to hear that One Dollar has been cancelled. I’ll miss the opportunity to see how writers would further develop the characters and their relationships in Season 2