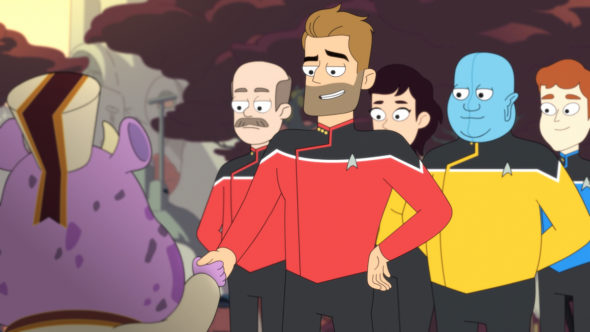 Are these ensigns ready to boldly go… ? Has the Star Trek: Lower Decks TV show been cancelled or renewed for a second season on CBS All Access? The television vulture is watching all the latest cancellation and renewal news, so this page is the place to track the status of Star Trek: Lower Decks, season two. Bookmark it, or subscribe for the latest updates. Remember, the television vulture is watching your shows. Are you?

Streaming on the CBS All Access subscription service, Star Trek: Lower Decks is the latest TV show in the franchise based on the original Star Trek series created by Gene Roddenberry. The series stars the voices of Tawny Newsome, Jack Quaid, Noël Wells, Eugene Cordero, Dawnn Lewis, Jerry O’Connell, Fred Tatasciore, and Gillian Vigman. The show focuses on the support crew that serves on one of Starfleet’s least important ships, the U.S.S. Cerritos, in the year 2380. Ensigns include irreverent Beckett Mariner (Newsome), rule-following Brad Boimler (Quaid), medical assistant D’Vana Tendi (Wells), and Sam Rutherford (Cordero), who’s adjusting to a cyborg implant. They have to keep up with their duties and their social lives, often while the ship is being rocked by a multitude of sci-fi anomalies. The bridge crew of the U.S.S. Cerritos include Captain Carol Freeman (Lewis), First Officer Jack Ransom (O’Connell), Bajoran Lieutenant Shaxs (Tatasciore), and Doctor T’Ana (Vigman).

We don’t have to wonder if CBS All Access will cancel or renew Star Trek: Lower Decks for season two. The series has already been picked up for a second season. On top of that, the streaming service is trying to attract more subscribers and it’s been reported that the plan is to keep releasing new Trek programming all year round. An animated series like this is a relatively cheap way to help do that. I’ll update this page with breaking developments. Subscribe for free alerts on Star Trek: Lower Decks cancellation or renewal news.

What do you think? Are you glad that the Star Trek: Lower Decks TV show has been renewed for a second season? How would you feel if CBS All Access cancelled this TV series, instead?