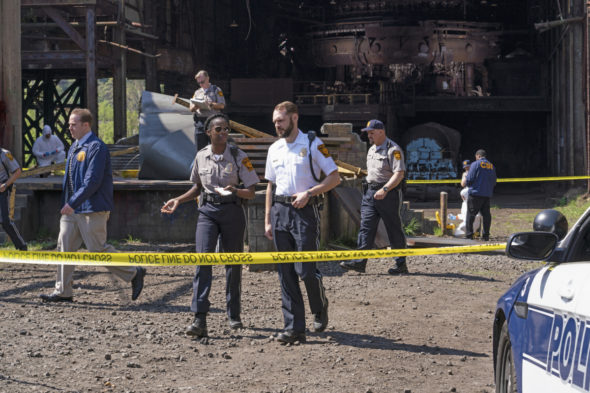 TV show description:
From creator Jason Mosberg, the One Dollar TV show is a mystery thriller, set in small-town America. The drama follows a single dollar bill, as it changes hands and connects several characters who are involved in a multiple murder.

Bud Carl (Lynch) is the owner of his family business, Carl Steel. As a well-loved townie, Bud is known to most of his employees as Pop.

Pops’ lowest-paid employee is single father Garrett Drimmer (Ettinger). A high school dropout with a history of partying, Garrett is now an industrious worker who is trying to improve life for himself and his family. Ken Fry (Simpson) is a former mill employee, whom Pop had to let go. These days, what money he brings in comes from the yard sales at which he hawks items stolen from his neighbors.

Peter Trask (Denham) is Braden’s new police chief. He’s still a bit wet behind the ears but is a competent cop. His former best friend and partner, Jake Noveer (Martello-White), left the force behind to investigate the disappearance of a child. These days, he is a private investigator, with an impressive skill set and good heart, and a little bit of attitude.

Danielle Furlbee (Berger) may be the daughter of the richest man in town, but as high school valedictorian, she is not without her own achievements. While Dannie is bright and confident, she’s still something of a babe in the woods. Her witty, knowing best friend, Julie Gardner (Lawrence), largely lives in Dannie’s shadow.

Rounding out the cast of characters are the charming newcomer Randall Abatsy (Odom Jr.), known for throwing posh parties and his charity work, and Charles (Perry), a former con man who is in declining health.

As the dollar bill passes from person to person, the series paints a picture of post-recession rust belt living in Braden, a community with deep cultural and class divisions.

Series Finale:
Episode #10 — Jake Noveer
After a bombshell from her family, Dannie is forced to reassess her future. Tensions run high as Bud and Goot feel Jake closing in on them.
First aired: November 1, 2018.

What do you think? Do you like the One Dollar TV series? Should this CBS All Access TV show have been cancelled or renewed for a second season?

I loved this show. I could not remember the name of it and looked and looked to find it to see if I could look for more episodes. There are so many cancelled shows every year it is ridiculous. This show has well formed characters and a great plot that kept you wanting more. So sad.

Loved this show. Quite disappointed that there was not a season 2. I most enjoyed the detective. Please consider bringing him back.

Exceptionally well written show. It should be renewed for another season.

I very much enjoy this show. Most tv shows do not hav enough depth for a intricate mind such as the one I’ve been given. All shows I tend to find fascinating usually get cancelled because the minds of the masses can’t comprehend things beyond what they can see with there eyes.