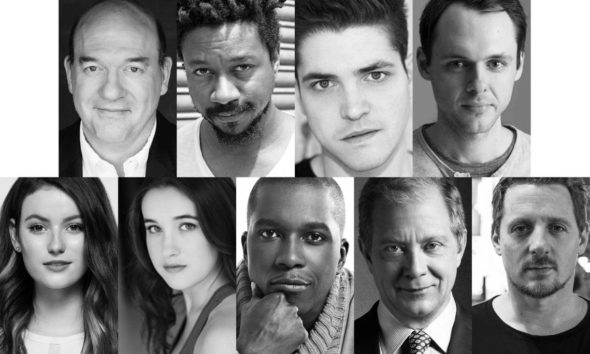 CBS All Access has found their new stars. Recently, the network announced the main cast for their upcoming TV show $1.

Production on $1 is set to begin later this month. CBS All Access has not yet announced a premiere date, but you can read more details below:

Production of the series is set to begin in late March on location in Pittsburgh, Penn.

The $1 cast members announced today include:

John Carroll Lynch will portray Bud Carl, owner of the family business, Carl Steel, and beloved around town. He’s known to most of his employees as “Pop.” Lynch’s television credits include FX’s “American Horror Story,” AMC’s “The Walking Dead” and ABC’s “The Drew Carey Show.” On film, Lynch is best known for his role in the Coen brothers film “Fargo” and was recently seen in “The Founder” and “Jackie.” Last year, he made his directorial debut with the film “Lucky,” starring Harry Dean Stanton.

Nathaniel Martello-White will portray Jake Noveer, a resourceful, willful and mostly good-hearted man who left the Braden Police Department to investigate a child disappearance and now works exclusively as a private investigator. Currently, Martello-White can be seen as DC Nathan Bilk opposite Carey Mulligan in the four-part BBC/Netflix mini-series “Collateral.” His other recent credits include playing Dhari in the SHOWTIME/SKY show “Guerrilla” and the role of Mark in the Olivier Award-winning stage production of “People, Places & Things” at St. Ann’s Warehouse in New York. His debut short “Cla’am” was nominated for the Grand Jury Prize at SXSW in 2017.

Philip Ettinger will portray Garrett Drimmer, a high school dropout and former hard partier who presently works in the lowest paid position at Carl Steel. Now, he is a hardworking and devoted single father trying to make positive changes in his life. Ettinger is best known for his roles in James Schamus’ “Indignation,” opposite Logan Lerman, and “Compliance,” directed by Craig Zobel. His television credits include HBO’s “Girls,” CBS’ “The Good Wife” and TNT’s “The Closer.”. In 2014 Ettinger received a Lucille Lortel Award nomination for his performance in “Bad Jews” at the Roundabout Theatre Company.

Chris Denham will portray Police Chief Peter Trask, the town’s somewhat green but very capable young police chief who used to be best friends and partners with Jake. Currently, Denham has a recurring role on SHOWTIME’s BILLIONS and previously starred in WGN America’s critically acclaimed series “Manhattan.” Denham’s film credits include Martin Scorsese’s “Shutter Island” and the Academy Award®-winning “Argo.” He will next be seen in the upcoming film “Fast Color.”

Kirrilee Berger will portray Danielle “Dannie” Furlbee, the daughter of the richest man in town and the valedictorian of her high school in the summer between senior year of high school and college. More book-smart than street-smart, she is confident in her intelligence and appearance. Berger’s television credits include Amazon’s “Just Add Magic,” Disney’s “K.C. Undercover” and Netflix’s upcoming “The Who Was? Show.” On stage, Berger played the role of Jane Banks in the Broadway production of “Mary Poppins” and Susan Parks in the Broadway National Tour of “Billy Elliot.”

Gracie Lawrence will portray Julie Gardner, Dannie’s best friend who is savvy and quick with a joke but lives a little bit in Dannie’s shadow. Lawrence had her first major break in the Broadway production of Neil Simon’s “Brighton Beach Memoirs” and her television credits include CBS’ “The Good Wife,” FX’s “The Americans” and TV Land’s “Younger.”

Leslie Odom Jr. will portray Randall Abatsy, new in town, he stands out as larger than life with his politician-like charisma and is known for his charitable work and lavish theme parties. Odom Jr. is best known for his Tony and Grammy Award-winning performance in the hit Broadway musical “Hamilton” and was recently seen in the 20th Century Fox film “Murder on the Orient Express.” On television, he starred in NBC’s “Smash” and had recurring roles on NBC’s “Law & Order: Special Victims Unit” and CBS’ “Persons of Interest,” among others. He’ll next be seen starring alongside Freida Pinto in the film “Only.”

Jeff Perry will portray Charles, a retired con man from Braden with declining health. On television, Perry is best known for his roles on ABC’s hit series “Scandal” and CBS’ “Nash Bridges” as well as memorable roles on “Grey’s Anatomy,” “The West Wing,” “Prison Break” and “Lost,” among others. He’ll next be seen in the films “Lizzie,” alongside Chloe Sevigny, and “Trial by Fire” with Laura Dern.

Sturgill Simpson will portray Ken Fry, a resident of Braden who used to work at the steel mill until he was let go by “Pop” Carl. He now makes his living holding a never-ending yard sale with items stolen from peoples’ front yards and porches. $1 will serve as Simpson’s acting debut. He is known for his most recent album, A Sailor’s Guide to Earth, which won the award for Best Country Album at the 59th annual Grammy Awards. Since the album’s release, Simpson has played sold out shows across 12 countries and has performed on “Saturday Night Live,” THE LATE SHOW with STEPHEN COLBERT and more.

$1 is a mystery set in a small rust belt town in post-recession America, where a one-dollar bill changing hands connects a group of characters involved in a shocking multiple murder. The path of the dollar bill and point of view in each episode paint a picture of a modern American town with deep class and cultural divides that spill out into the open as the town’s secrets get revealed. $1 will be produced by CBS Television Studios. Matt DeRoss of Anonymous Content, Alexandre Dauman, Rafael Yglesias and Jason Mosberg will serve as executive producers, and Craig Zobel (“Compliance,” “The Leftovers”) will direct all episodes and executive produce.”

What do you think? Are you a fan of mystery dramas? Will you watch $1?

I watched a very good movie directed by Fabien dufils called 1$ with the same story, concept and atmosphere. It is very strange not to see his credit as the creator of this tv serie. How come?

This TV series $1 was taken from a film called 1 Buck that was written, produced and directed by Fabien Dufils. Before the release of 1 Buck and all of its awards accomplishments, Fabien Dufils’ pitched his 1 Buck TV series based on the film to TV networks including CBS and streaming networks as well. Look up 1 Buck the movie and you’ll see that the idea described in this CBS series is an idea they stole from the Fabien Dufils film as well as the idea he pitched to the networks.

There was a feature film shot in Shreveport, Louisiana called 1 Buck by producer/writer/director Fabien Dufis. It was filmed in 2015 and premiered Sept 21, 2017 in the United States at selected theater. During it’s run in film festivals, 1 Buck has won over 34 awards in film festivals, in nyc, LA, Seattle, Washington DC and PITTSBURG. Awards have been won in Sweden, England, Spain, Portugal, Brazil, India and Australia. See IMBD about the film 1 Buck. This TV show sounds like a rip off of the 1 Buck filmed in Louisiana, minus the swamp scenes.

Is it me or is tv just getting stupider and stupider?