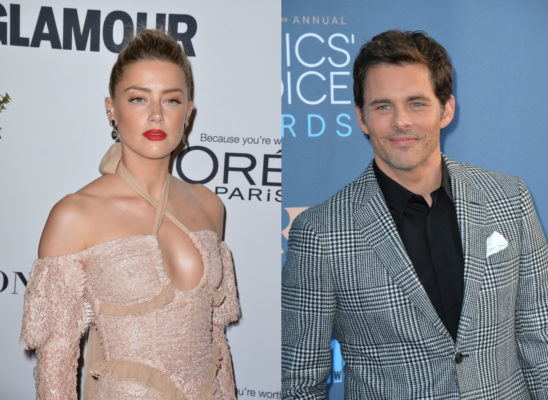 Based on the novel, the drama series is Stephen King’s “apocalyptic vision of a world decimated by plague and embroiled in an elemental struggle between good and evil. The fate of mankind rests on the frail shoulders of the 108-year-old other Mother Abagail and a handful of survivors. Their worst nightmares are embodied in a man with a lethal smile and unspeakable powers: Randall Flagg, the Dark Man.”

CBS All Access has not yet announced a premiere date for The Stand, but you can read more info below:

August 1, 2019 – CBS All Access, CBS’ digital subscription video on-demand and live streaming service, today announced James Marsden, Amber Heard, Odessa Young and Henry Zaga have joined the cast of its original limited event series THE STAND, based on Stephen King’s bestselling novel of the same name, and Stephen King will write the last chapter of the series, providing a new coda that won’t be found in the book. The announcements were made by Julie McNamara, Executive Vice President of Original Content for CBS All Access, during the service’s biannual Television Critics Association presentation.

James Marsden will portray Stu Redman, an ordinary working-class factory man in an extraordinary situation with a damaged quality to him that belies his exterior. Most recently seen on the hit dark comedy “Dead to Me,” Marsden’s other television credits include “Westworld” and “30 Rock,” and he will also appear in FX’s upcoming “Mrs. America.” In film, he will soon star in the live-action/animation hybrid film“Sonic the Hedgehog” and “The Comeback Trail” opposite Robert De Niro, Morgan Freeman, Tommy Lee Jones and Zach Braff.

Amber Heard will play Nadine Cross, a deeply conflicted woman who feels the consequences of her actions, but is still compelled by her allegiance to Randall Flagg, the Dark Man. She recently starred in Warner Brothers’ “Aquaman” opposite Jason Momoa which was a massive box office success. She can currently be seen in Alex Ross Perry’s “Her Smell” alongside Elizabeth Moss. Other film credits include: “Justice League,” “The Danish Girl,” “Pineapple Express,” Magic MikeXXL,” among others. Additionally, Heard is an activist and uses her platform to advocate for human rights issues. She is an ambassador for Women’s Rights for the ACLU, a Human Rights Champion of the United Nations and is actively involved with SAMS (Syrian American Medical Society), The Art of Elysium, among other organizations. Heard is also a L’Oréal Global Spokesperson.

Odessa Young will play Frannie Goldsmith, a pregnant young woman navigating a strange new world, who also has the foresight to recognize that there is evil lurking beyond the Dark Man. Young will next be seen opposite Elisabeth Moss in the film “Shirley.” Her other film credits include “Assassination Nation,” “A Million Little Pieces” opposite Aaron Taylor-Johnson and “The Professor.”

Henry Zaga will portray Nick Andros, a young deaf and mute man who finds himself in a position of authority when the unthinkable happens. He has a habit of risking his own well-being for the safety of others. Zaga can be seen in the television series “13 Reasons Why” and the upcoming “Trinkets” as well as “Looking for Alaska,” which is currently in production. He will also be seen in Josh Boone’s “X-Men: New Mutants.”

THE STAND is Stephen King’s apocalyptic vision of a world decimated by plague and embroiled in an elemental struggle between good and evil. The fate of mankind rests on the frail shoulders of the 108-year-old other Mother Abagail and a handful of survivors. Their worst nightmares are embodied in a man with a lethal smile and unspeakable powers: Randall Flagg, the Dark Man.

THE STAND joins CBS All Access’ growing slate of original series which currently include THE GOOD FIGHT, NO ACTIVITY, STRANGE ANGEL, TELL ME A STORY and THE TWILIGHT ZONE. CBS All Access’ slate of original series will continue to expand with the addition of WHY WOMEN KILL, premiering August 15, and INTERROGATION, with additional programming to be announced. CBS All Access is also the exclusive domestic home to STAR TREK: DISCOVERY, STAR TREK: LOWER DECKS and STAR TREK: PICARD, featuring Sir Patrick Stewart reprising his iconic role as Jean-Luc Picard.”

What do you think? Have you read The Stand? Will you watch the CBS All Access TV show?