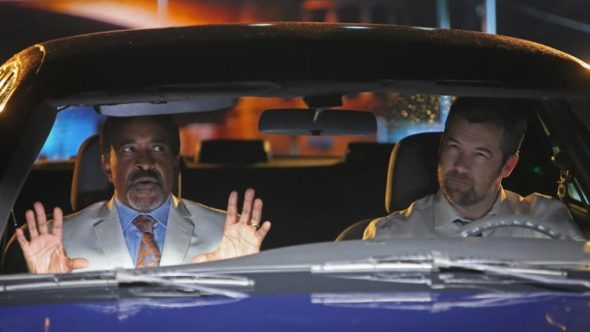 What’s in store for the new season of No Activity? CBS All Access just announced the guest stars for the TV show’s third season.

Sept. 9, 2019 – CBS All Accesstoday announced a number of new guest stars are set to appear in season three of the service’s Funny Or Die comedy series NO ACTIVITY, which will debut later this fall.

Beth Behrs currently stars opposite Cedric the Entertainer on the hit CBS comedy THE NEIGHBORHOOD, which will return for its second season in September. She is also known for her role as Caroline on the Network’s sitcom “2 Broke Girls.” Her film credits include “Hello, My Name is Doris” opposite Sally Field and Max Greenfield, voice work in Pixar’s “Monsters University” and the animated film “Boonie Bears: The Big Shrink.”

Joe Keery is best known as Steve Harrington on “Stranger Things,” for which he won a 2017 Screen Actors Guild Award as part of the ensemble. His past television credits include “Empire” and “Chicago Fire.” In film, Keery will be seen in the upcoming action-adventure comedy “Free Guy,” opposite Ryan Reynolds, Jodie Comer and Lil Rel Howery. His past film credits include Aaron Sorkin’s “Molly’s Game,” “Slice,” “Shotgun” and “Henry Gamble’s Birthday Party.”

Keegan-Michael Key won an Emmy Award® for his sketch series “Key & Peele,” which he co-created with Jordan Peele. His past television credits include “Friends from College,” “Playing House,” “Fargo,” “Parks & Recreation,” “Children’s Hospital,” “Gary Unmarried” and six seasons of “MADtv.” His television voice work includes “The Dark Crystal: Age of Resistance,” “Bob’s Burgers,” “Bojack Horseman,” “Archer” and “SuperMansion,” which garnered him an Emmy® nomination for Outstanding Voiceover Performance. He also plays the narrator in the upcoming series “Green Eggs and Ham.” Key’s film credits include “Toy Story 4” and “The Lion King,” as well as upcoming films “Playing with Fire,” “Dolemite Is My Name” and “All the Bright Places.” He recently wrapped production on the upcoming television series “Brain Games” as well as the Christmas movie “Jingle Jangle.” He will soon be appearing opposite Meryl Streep in the film adaptation of the Tony® nominated Broadway musical “The Prom.” Key’s other film credits include “Keanu,” which he co-produced, “The Predator” and Mike Birbiglia’s “Don’t Think Twice.”

Dylan McDermott portrayed lawyer Bobby Donnell for eight seasons on “The Practice,” which earned him a Golden Globe Award® for Best Performance by an Actor in a Television Series, as well as an Emmy® nomination. Most recently, he starred in the comedy “LA to Vegas.” His other television credits include the first two installments of “American Horror Story,” “Dark Blue,” “Hostages” and “Stalker.” McDermott will next be seen in “The Politician,” which will premiere in September. His film credits include “Steel Magnolias,” “In the Line of Fire,” “Josie,” “Blind,” “Miracle on 34th Street,” “Home for the Holidays,” “Olympus Has Fallen,” “The Perks of Being a Wallflower” and “The Campaign.”

Paula Pell currently stars in “A.P. Bio” from producer Lorne Michaels. In film, she has appeared in the Academy Award® Best Picture winner “Birdman,” “Wine Country” directed by Amy Poehler, “Inside Out” and “Other People.” On television, Pell has been seen on “SMILF,” Judd Apatow’s “Love,” the animated comedy “Big Mouth” and the lauded “Documentary Now!” episode “Co-op.” She is currently in production on “The Mapleworth Murders,” which she is also writing, and she is producing and co-writing the comedy feature “Hometown.” An accomplished writer, Pell spent two decades creating beloved characters and sketches for “Saturday Night Live.” Her other writing credits include “30 Rock,” for which she also served as producer, the feature film “Sisters” and the web series “Hudson Valley Ballers,” in which she also starred.

Following last season’s disastrous bust, season three finds Detectives Cullen and Tolbeck back in uniform with a revolving door of quirky new partners and even quirkier criminals, while robots edge in on Janice and Fatima in dispatch. The first two seasons of NO ACTIVITY are currently available to binge exclusively on CBS All Access.

In addition to NO ACTIVITY, CBS All Access’ growing slate of original series currently includes THE GOOD FIGHT, STRANGE ANGEL, TELL ME A STORY, THE TWILIGHT ZONE and WHY WOMEN KILL. CBS All Access’ slate of original series will continue to expand with the addition of INTERROGATION, the limited event series THE STAND and THE MAN WHO FELL TO EARTH, with additional programming to be announced. CBS All Access is also the exclusive domestic home to STAR TREK: DISCOVERY, STAR TREK: LOWER DECKS and STAR TREK: PICARD, featuring Sir Patrick Stewart reprising his iconic role as Jean-Luc Picard.”

What do you think? Have you seen No Activity? Will you watch the new season?