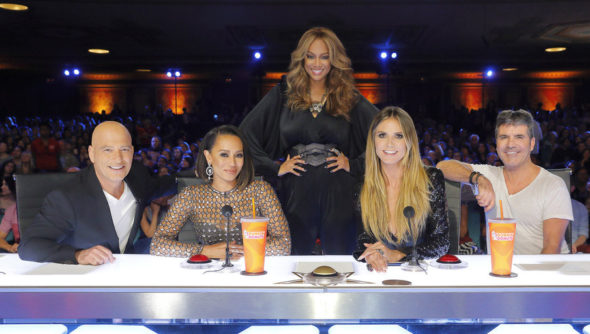 Will anyone press the golden buzzer? Has the America’s Got Talent TV show been cancelled or renewed for a 13th season on NBC? The television vulture is watching all the latest cancellation and renewal news, so this page is the place to track the status of America’s Got Talent season 13. Bookmark it, or subscribe for the latest updates. Remember, the television vulture is watching your shows. Are you?

Airing on the NBC television network, America’s Got Talent is a nationwide talent competition series, hosted by Tyra Banks. Howie Mandel, Simon Cowell, Melanie Brown, and Heidi Klum have returned to judge the 12th season. Guest judges this cycle include Chris Hardwick, DJ Khaled, Laverne Cox, and Seal. The series typically airs on Tuesdays (and also on Wednesdays, during the live performances and results episodes).

The 12th season of America’s Got Talent averaged a 2.63 rating in the 18-49 demographic and 12.90 million viewers, on Tuesdays. Compared to Tuesdays in season 11, that’s up by 6% and up by 10%, respectively. The Wednesday editions averaged a 2.22 in the demo with 12.01 million viewers, up by 3% in the demo and up by 10% in viewership. Find out how America’s Got Talent stacks up against other NBC TV shows.

The ratings have been solid so I’m not exactly going out on a limb when I say that NBC will renew this show, unless something unforeseen happens. In addition to doing very well for the Peacock Network, last year’s ratings rose significantly on both Tuesdays and Wednesdays. I’ll update this page as soon as the renewal becomes official. Subscribe for free updates on any America’s Got Talent cancellation and renewal news.

2/21 update: NBC has renewed America’s Got Talent for season 13. Find out how to audition. Details here.

What do you think? Do you hope America’s Got Talent will be renewed for a 13th season? How would you feel if NBC cancelled this TV show, instead?

America’s Got Talent is a talent search show, they do not get renewed yearly like most shows and since they are finishing up the open casting calls feb 23rd, 2018…..I would assume that they will be coming back by march or april 2018.

i thought there was supposed to be a show from las vegas tonigh. heard this from one of the performers. cant fing any info……..kinda bummed

If a performer told you this; I would really begin question how valid this person is in sources, it was not a live show…but just an audition. You would have had to sign up ahead of time for it like most do but for the future it can be found here because other than this site and on their show they don’t publicize it much anywhere else

Waiting for new season, one of my favorite things to watch on TV

I am looking forward to season 13 of AGT ; it is one of my favorite shows .

I love Tyra Banks! She is so amusing, sweet and kind to all the contestants! And her costumes are awesome!

Yes. I hope AGT is renewed for Season 13. For a guest judge next season, I would like to see actor C. Thomas Howell. He may decline, but whoever is in charge of selecting guest judges can at least contact him. He is a great actor, and would probably have a blast as a guest judge.

Renew the show, but with a new host. Tyra is awful – no Nick, for sure.

Let it continue for all the audience.

The golden buzzer has already been used. The little girl singer /ventriloquist made it to finals. She deserved it.