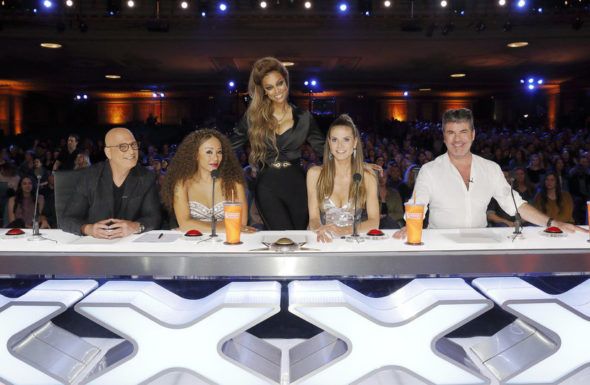 Has our nation been sapped of talent? Is the America’s Got Talent TV show cancelled or renewed for a 14th season on NBC? The television vulture is watching all the latest cancellation and renewal news, so this page is the place to track the status of America’s Got Talent, season 14. Bookmark it, or subscribe for the latest updates. Remember, the television vulture is watching your shows. Are you?

The Tuesday editions of 13th season of America’s Got Talent averaged a 2.09 rating in the 18-49 demographic and 11.44 million viewers. Compared to the Tuesday episodes of season 12, that’s down by 20% and 11%, respectively.

The Wednesday editions of 13th season of America’s Got Talent averaged a 1.63 rating in the 18-49 demographic and 10.39 million viewers. Compared to the Wednesday episodes of season 12, that’s down by 38% and 19%, respectively.

Will NBC cancel or renew America’s Got Talent for season 14? Unless something unforeseen happens, it’s about as likely to be cancelled as I am to dine on unicorn. The talent competition has actually risen in the ratings over the past couple of years. What’s more, the network is launching a spin-off this coming winter. Still, I’ll keep a hungry on the ratings and update this page with breaking developments. Subscribe for America’s Got Talent cancellation or renewal alerts.

8/22/18 Status Update: NBC has renewed a multi-year contract with Cowell to keep him as a judge on the series, essentially confirming that America’s Got Talent has been renewed.

What do you think? Are you glad that America’s Got Talent has been renewed through season 15? How would you feel if NBC had cancelled this TV show, instead?

Tyra is NOT back. Neither are Heidi or Mel

My Mom and Dad have been watching AGT for years. Mom is elderly and Dad passed away a couple years ago. She’s still watching and is an absolute fan, never missing an episode. She is pacing already for season 14. I’ll try to keep her entertained, but hurry up guys. LOL!

My husband and I are anxiously awaiting the return of AGT. Please let me know when we can expect to see it again.