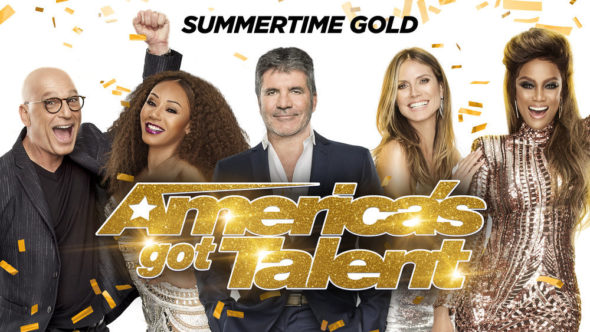 In the last couple of years on NBC, the America’s Got Talent TV show has seen a notable rise in the ratings. It has done so well, the Peacock Network has ordered a spin-off. How long can it keep on climbing? Will America’s Got Talent be cancelled or renewed for season 14? Stay tuned. **Status update below.

9/19 update: You can see the latest night’s ratings in context.

Note: If you’re not seeing an updated chart, please try reloading the page or view them here and here.

What do you think? Do you like the America’s Got Talent TV series? Should NBC cancel or renew this reality TV show competition for a 14th season?

**8/22/2018 Status Update: NBC has renewed a multi-year contract with Cowell to keep him as a judge on the series, essentially confirming that America’s Got Talent has been renewed.