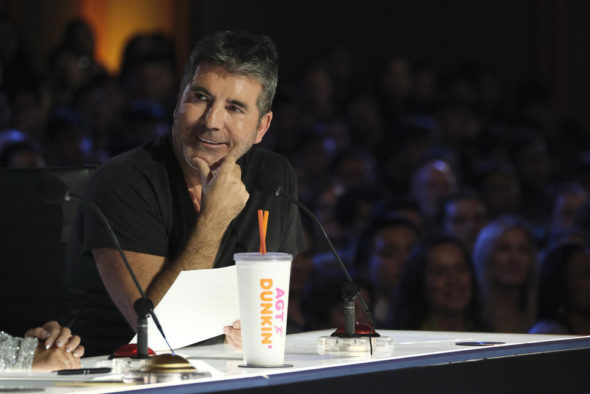 How deep is our nation’s store of talent? Has the America’s Got Talent TV show been cancelled or renewed for a 15th season on NBC? The television vulture is watching all the latest cancellation and renewal news, so this page is the place to track the status of America’s Got Talent, season 15. Bookmark it, or subscribe for the latest updates. Remember, the television vulture is watching your shows. Are you?

An unscripted NBC TV series, America’s Got Talent features both individuals and groups competing. The winning act receives a cash prize and the chance to headline in the America’s Got Talent Live show in Las Vegas. In season 14, Terry Crews joins as the TV series’ fifth host, replacing Tyra Banks. Howie Mandel and Simon Cowell return to judge. They’re joined by Gabrielle Union and Julianne Hough, who are taking over for Melanie Brown and Heidi Klum.

The Tuesday editions of the 14th season of America’s Got Talent averaged a 1.51 rating in the 18-49 demographic and 9.51 million viewers. Compared to the Tuesday episodes of season 13, that’s down by 28% and 17%, respectively.

The Wednesday editions of the 14th season of America’s Got Talent averaged a 1.21 rating in the 18-49 demographic and 8.56 million viewers. Compared to the Tuesday episodes of season 13, that’s down by 26% and 18%, respectively.

Don’t spend your summer worrying whether NBC cancel or renew America’s Got Talent for season 15. First of all, that’s my job. Secondly, the Peacock Network issued a renewal ahead of this season’s debut. Still, I’ll keep a hungry eye on the ratings and update this page as the season progresses. Subscribe for America’s Got Talent cancellation, renewal and series news alerts.

What do you think? Are you glad that America’s Got Talent has been renewed through season 15? How would you feel if NBC had cancelled this TV show, instead?

I like the show. I don’t like max Major using it as a time filler. I heard they still expecting audtion for this season. So I think it live. It comes on may 26 where max has 6 gigs. 2 gigs are set for that week so if he not on the 1st episode it only 4 gigs. 3 are in the next so if he not on the 2nd episode it only 1 gig. The show doesn’t mean much to him just one performance really. He doesn’t need it anyway he changes 29-39G to talk. And 35-59G for events… Read more »

I am also looking forward to Americca’s Got Talent return. The show most go on, right. Yes, I watch AGT at least occasionally. It’s a good show and entertaining show to watch with crazy acts too. Wow!!!

Yes we are happy to see the return.

AGT is a great show, giving the “average Joe” an opportunity they may never have gotten were it not for these types of shows. Unlike American Idol and The Voice, it’s a variety show where anything goes. It would be a shame if it gets cancelled. Im a faithful fan and would be so disappointed as I’m sure many others would be!

I would be very upset if they would take is off the air I like the show a lot and Also I watch it all the time I am a big fan of the show. It keeps me busy durning the summer months.

At least we have AGT on Netflix.