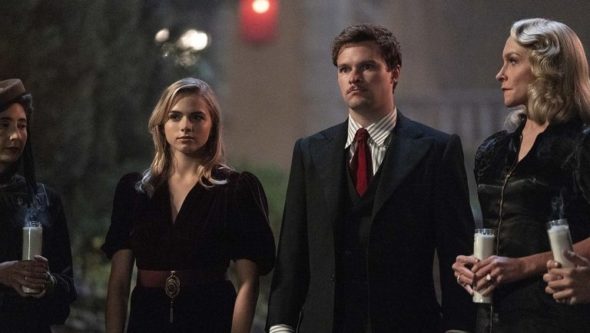 The story of Jack Parsons has come to a premature end on television. CBS All Access has cancelled its Strange Angel TV series so there won’t be a third season.

A historical period drama, Strange Angel stars Jack Reynor, Rupert Friend, Bella Heathcote, Peter Mark Kendall, Peter  Mark Kendall, Michael Gaston, Greg Wise, Angus Macfadyen, Laine Neil, and Veronica  Osorio. Based on the book by George Pendle, the series is inspired by the true story of Caltech’s Jack Parsons (Reynor) and his experiences in the worlds of science, science fiction, and the occult. In season two, with World War II in full swing, Jack’s rocketry work is turning a profit. While he’s part of the military-industrial complex by day, at night, he and his wife Susan (Heathcote) get deeper into their occult religion and they invite the sex cult into their mansion. Jack also begins a personal relationship with the cult’s founder, Aleister Crowley (Macfadyen).

The Strange Activity series debuted in June 2018 and the first season ran for 10 episodes. The second season debuted in June of this year and ran for just seven installments. This marks the second cancellation by the streaming service. One Dollar was dropped after one season in December 2018.

“Strange Angel will not be returning for a third season,” said Julie McNamara, EVP of Original Content for CBS All Access. “The series brought new meaning to the idea that the truth is stranger than fiction and we are incredibly thankful to the creative team of Mark Heyman, David DiGilio, Ridley Scott and David W. Zucker for their vision, as well as the fantastic cast for bringing the bizarre story of Jack Parsons to life.”

What do you think? Did you enjoy the Strange Angel TV show? Are you sorry to hear that it’s been cancelled?

There’s no mystery about why. They were about to dramatize the exploits of Parsons and L. Ron. Hubbard with the real details, which the good Church of Scientology would definitely not allow. They most likely weighed in, threatening all sorts of litigation, which they’re famous for. I’m a member of the OTO, by the way, and the NY Lodge loved the show, and we all agreed as to why it was shot down.