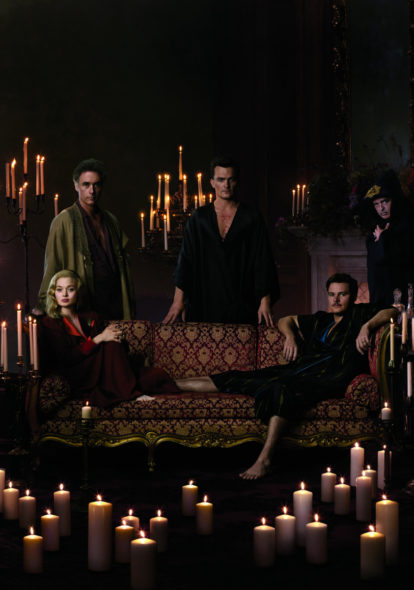 What does fate have in store for Jack Parsons? Has the Strange Angel TV show been cancelled or renewed for a third season on CBS All Access? The television vulture is watching all the latest TV cancellation and renewal news, so this page is the place to track the status of Strange Angel, season three. Bookmark it, or subscribe for the latest updates. Remember, the television vulture is watching your shows. Are you?

A CBS All Access drama, Strange Angel stars Jack Reynor, Rupert Friend, Bella Heathcote, Peter Mark Kendall, Peter  Mark Kendall, Michael Gaston, Greg Wise, Angus Macfadyen, Laine Neil, and Veronica  Osorio. Based on the book by George Pendle, the series is inspired by the true story of Caltech’s Jack Parsons (Reynor) and his experiences in the worlds of science, science fiction, and the occult. In season two, with World War II in full swing, Jack’s rocketry work is turning a profit. While he’s part of the military-industrial complex by day, at night, he and his wife Susan (Heathcote) get deeper into their occult religion and they invite the sex cult into their mansion. Jack also begins a personal relationship with the cult’s founder, Aleister Crowley (Macfadyen).

Unless they decide to publicize viewership, it is hard to predict whether CBS All Access will cancel or renew Strange Angel for season three. CBS is the first major broadcast network to sell subscriptions to a streaming platform, and although All Access is also home to a sizable CBS programming library, they’re still trying to build up their original content. Overall, I would think this makes them more likely to renew any given original than cancel it. That said, I haven’t heard much buzz about Strange Angel. Flying blind, I think it will be renewed for a third season, but that’s just speculation. I’ll keep an eye on the trades and update this page with any developments, so subscribe for free Strange Angel cancellation or renewal alerts.

What do you think? Should the Strange Angel TV show have been renewed for a third season? Are you sorry that CBS All Access cancelled this TV series, instead?

Aw, unfortunate indeed. Yes, it was bizarre but intriguing so I eagerly awaited each episode. Too bad.

CBS CAN’T CANCEL STRANGE ANGEL. SEASON 2 ENDED WITH THE EXPECTATION OF A SEASON 3. I HOPE ANOTHER NETWORK WANTS TOO.

If CBS cancels season 3, I think Netflix should pick it up!

Yes, indeed. Or Prime Video. They picked up “The Expanse” when it was cancelled. Season 6 just started last week.

The wife and I love that show so much! We await season 3 with great anticipation.

Please renew!! This show is so good, I liked season one but season two was SO FIRE. I need more Susan and Alfred in my life <3

I think it should definitely be cancelled.