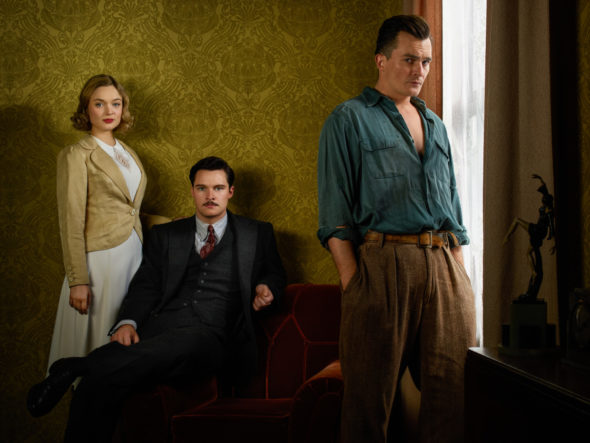 TV show description:
From creator Mark Heyman, the Strange Angel TV show is based on the book by George Pendle. The drama is inspired by the true story of blue-collar worker Jack Parsons (Reynor) and his experiences in the worlds of science, science fiction, and the occult.

In 1930s Los Angeles, Jack is a chemical factory janitor but has aspirations of one day building rockets that can transport people to the moon. During the day, he devotes himself to nascent rocket science. Meanwhile, at night, he is drawn to Aleister Crowley’s religion and sex magick rituals.

Series Finale:
Episode #17 — Aeon
Susan and Patty’s relationship reaches a breaking point when Susan learns of her sister’s indiscretions – nevertheless, they must join forces to use Virgil as a means to an end. After Marisol receives devastating news, she gains a new perspective on her relationship with Richard. Jack has a chance to get back into the military’s good graces, but the conditions may be too tough to swallow. Yet with the Magus in jail, Jack’s power within the Agape rises to new heights; however, the arrival of a new prospective tenant at the Parsonage threatens to change all that.
First aired: July 25, 2019.

What do you think? Do you like the Strange Angel TV series? Should this CBS All Access TV show have been cancelled or renewed for a third season?

This is a great damn show! CBS you made a bad decision. Wish Netflix or Prime or Hulu would pick it up! Cancelling cBS. Idiots who are you to cacel this great show?

I am very disappointed that Strange Angel was cancelled. I would hope CBS Anytime would give shows on their pay service more of a chance than this. Strange Angel was telling an important story before CBS cut its legs out from under it. I keep giving CBS chances but the premature cancellation of shows like Person of Interest is still very painful. PoI just needed 4-6 more episodes to wrap it up properly. I don’t think CBS understood what PoI was about or how important it was. It was on the level of WestWorld, which is also an important story.… Read more »

Get me hooked and pull the plug before he ever reaches the moon? F*ck you CBS, done with you

we really liked the show, when wiil the second season air????

Please renew. I found the series very fascinating and would like to see it continue!