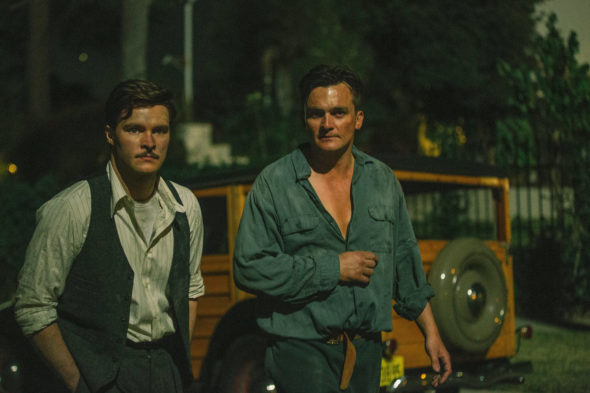 What in the world is next for Jack Parsons? Has the Strange Angel TV show been cancelled or renewed for a second season on CBS All Access? The television vulture is watching all the latest TV cancellation and renewal news, so this page is the place to track the status of Strange Angel, season two. Bookmark it, or subscribe for the latest updates. Remember, the television vulture is watching your shows. Are you?

A CBS All Access drama, Strange Angel stars Jack Reynor, Rupert Friend, Bella Heathcote, Peter Mark Kendall, Michael Gaston, Greg Wise, Rade Šerbedžija, Zack Pearlman, and Keye Chen. Based on the book by George Pendle, the series is inspired by the true story of blue-collar worker Jack Parsons (Reynor) and his experiences in the worlds of science, science fiction, and the occult. In 1930s Los Angeles, Jack is a chemical factory janitor but has aspirations of one day building rockets that can transport people to the moon. During the day, he devotes himself to nascent rocket science. Meanwhile, at night, he is drawn to Aleister Crowley’s religion and sex magick rituals.

Unless they decide to publicize viewership, it is hard to predict whether CBS All Access will cancel or renew Strange Angel for season two. For now, I’ll keep an eye on the trades and update this page with breaking developments. Subscribe for free Strange Angel cancellation or renewal alerts.

What do you think? Are you glad that the Strange Angel TV show has been renewed for a second season? How would you feel if CBS All Access had cancelled this TV series, instead?

Yes, of course. This series is an important historic ‘cult classic’ in the making. Just as parsons and the OTO was only attractive to those who sought it out.. to understand it.. so this tv show.. is a niche show.. that will appeal, to specific audiences. But I think in the next 20 to 30 years.. this could be a cult classic. (excuse the pun) This show should possibly be partially CROWD FUNDED by fans.. to create bonus features and contribute to spurring on the production. It is a labor of love.. and the team has outdone themselves in producing… Read more »