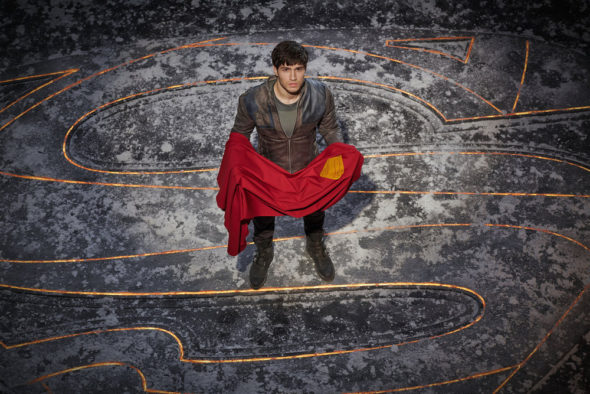 Has Seg-El ensured Superman’s future? Is the Krypton TV show cancelled or renewed for a second season on Syfy? The television vulture is watching all the latest cancellation and renewal news, so this page is the place to track the status of Krypton, season two. Bookmark it, or subscribe for the latest updates. Remember, the television vulture is watching your shows. Are you?

A Syfy superhero drama based on the DC characters created by Jerry Siegel and Joe Shuster, Krypton is a Superman prequel from executive producers David S. Goyer and Cameron Welsh. The series stars Cameron Cuffe, Shaun Sipos, Blake Ritson, Georgina Campbell, Elliot Cowan, Ann Ogbomo, Rasmus Hardiker, Wallis Day, Aaron Pierre, and Ian McElhinney. Unfolding 200 years before the destruction of Superman’s home planet, the story centers on Kal-El’s grandfather, Seg-El (Cuffe). Seg is faced with the starkest of choices. He can either save Krypton, or allow its destruction, in order to protect the fate of his future grandson.

The first season of Krypton averaged a 0.23 rating in the 18-49 demographic and 787,000 viewers. Find out how Krypton stacks up against the other Syfy TV shows.

Will Syfy cancel or renew Krypton for season two? My gut tells me that, unless the numbers really tank, it will score a renewal. With such a high-profile property, I wouldn’t be surprised if Syfy made a deal for two seasons from the start. I’ll keep an eye on the Nielsens and update this page with breaking developments. Subscribe for free Krypton cancellation and renewal alerts.

Tonight, August 3, 2019, it said “3 More Episodes of Krypton… ” Does that mean the SEASON Finale? Or is this the SERIES FINALE?

I really like this show and I don’t want it to end!
Say it isn’t so…

Krypton is not working. The villains are showed in a pretty freak way, all very tight and with very mixed plots, does not give time to enjoy anything, and also the series continues in a heavy love triangle for the protagonist that ruins the story.
Terrible actors, it will not be renewed, I know for sure.

Waiting a YEAR between new episodes is insanity. I can’t remember what I had for lunch yesterday. Yet the suits & writers think we are going to remember the different plot lines they developed over a year ago. Not bloody likely!

i think the series krypton need to be cancelled because the show was it it interesting at all..

Yes this show was very interesting. Need more please. How bout showing all the worlds captured being released, Integrating more tec. So much more can be done where they left off!

My husband loves this show and then got me hooked. is it coming back?