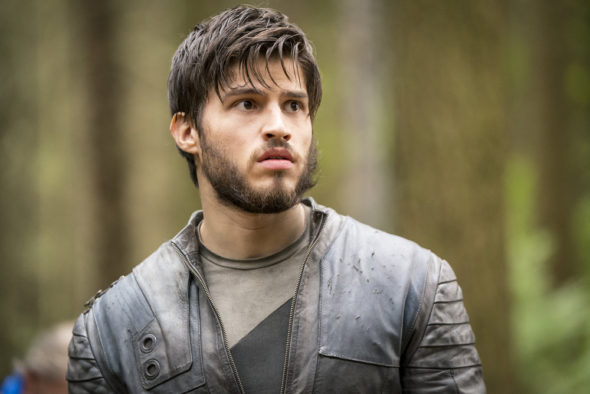 Can Seg-El get the job done? Is the Krypton TV show cancelled or renewed for a third season on Syfy? The television vulture is watching all the latest cancellation and renewal news, so this page is the place to track the status of Krypton, season three. Bookmark it, or subscribe for the latest updates. Remember, the television vulture is watching your shows. Are you?

The second season of Krypton averaged a 0.11 rating in the 18-49 demographic and 408,000 viewers. Compared to season one, that’s down by 54% and 48%, respectively. Find out how Krypton stacks up against the other Syfy TV shows.

Will Syfy cancel or renew Krypton for season three? Last year, this series was the channel’s highest-rated series. The ratings are way down this year but it’s still doing well when compared to other Syfy shows. The channel has also cancelled several other TV shows lately and the execs (theoretically) can’t cancel everything. So, I think that will help keep this one safe and Krypton will be renewed. However, the steep declines could easily spell cancellation, I’ll update this page with breaking developments. Subscribe for free Krypton cancellation and renewal alerts.

What do you think? Should the Krypton TV series have been renewed for season three? Are you sorry that Syfy cancelled this TV show instead?

I think this is a smart prequel to the Superman legacy. Please don’t leave us hanging. At least finish the series with a third season to wrap up this part of the story!! Thank you!!

Bring on third season this is what I have been waiting on !! I love whole thing

It is unfair you really cancelled it please bring it back

I am so flipping MAD I really liked this show and you cancel it without at least trying to give it an ending for the fans. Geez Really Cmon SYFY bring it back.

Krypton was just starting to get good an peak my interest an syfy cancels a series that was good like farscape was awsome. Krypton should of had a season 3 in my opinion.

Ridiculous should have been more seasons leave everybody in the dark and not even know what’s gonna happen next all TV series should have a finale two end the show. It was just now starting to get good just a season two didn’t have good ratings don’t mean season three wouldn’t have. It’s because season one didn’t have a great ratings so nobody watch season two but for the people that liked it the hell with them right

I would like if there is a third season