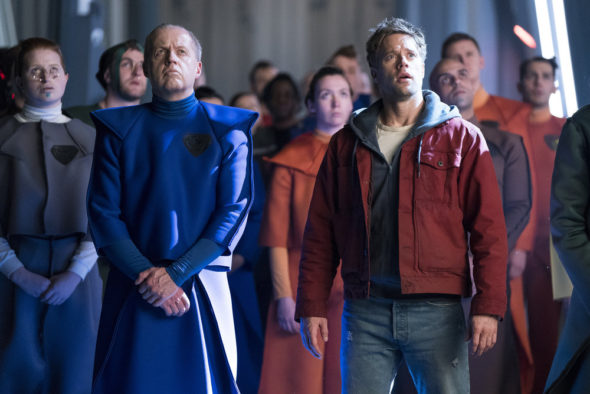 How goes Seg-El’s efforts during the second season of the Krypton TV show on Syfy? As we all know, the Nielsen ratings typically play a big role in determining whether a TV show like Krypton is cancelled or renewed for season three. Unfortunately, most of us do not live in Nielsen households. Because many viewers feel frustration when their viewing habits and opinions aren’t considered, we’d like to offer you the chance to rate all of the Krypton season two episodes here. *Status update below.

What do you think? Which season two episodes of the Krypton TV series do you rate as wonderful, terrible, or somewhere between? Should Syfy cancel or renew Krypton for a third season? Don’t forget to vote, and share your thoughts, below.

It is definitely a great show well written and great actors, i will love to see many more seasons for years to come.

Krypton is 1 of the BEST shows on tv and is the BEST show on the entire SYFY Network!!! I hope they reconsider and bring it back. It’s too good of a show to be canceled!!

Please keep it because I would Love to see Krypton Season 3, 4 & 5 please Renew the Krypton for the Season 3 Please Renew it Because I Love watching it

PLEASE RENEW KRYPTON FOR A 3RD SEASON!!!!! IT IS THE BEST SHOW ON TELEVISION!!!

Krypton is the best show on tv and season 2 is way better then season 2! My swimming team buddies got hooked on it after watching season 2 episode 1 & 2 so DON’T CANCEL IT!!!!!!!

Only 3 episodes left season 1 so good up to I record new season hope it good.

My husband and I love this show. We were happy it came back on.

KRYPTON IS THE BEST SHOW ON TV I MEAN I LOVE IT SO MUCH IT’S ALMOST PERFECT 9/10 STARS!!!