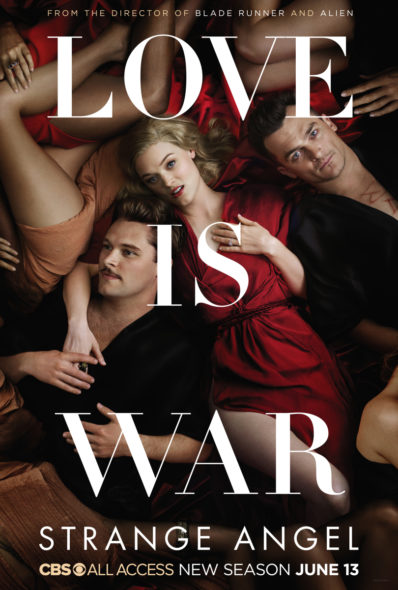 Is there magic in the air during the second season of the Strange Angel TV show on CBS All Access? As we all know, the Nielsen ratings typically play a big role in determining whether a TV show like Strange Angel is cancelled or renewed for season three. CBS All Access and other streaming platforms, however, collect their own data. If you’ve been watching this TV series, we’d love to know how you feel about the Strange Angel season two episodes. We invite you to rate them for us here. *Status update below.

A CBS All Access drama, Strange Angel stars Jack Reynor, Rupert Friend, Bella Heathcote, Peter Mark Kendall, Peter Mark Kendall, Michael Gaston, Greg Wise, Angus Macfadyen, Laine Neil, and Veronica Osorio. Based on the book by George Pendle, the series is inspired by the true story of Caltech’s Jack Parsons (Reynor) and his experiences in the worlds of science, science fiction, and the occult. In season two, with World War II in full swing, Jack’s rocketry work is turning a profit. While he’s part of the military-industrial complex by day, at night, he and his wife Susan (Heathcote) get deeper into their occult religion and they invite the sex cult into their mansion. Jack also begins a personal relationship with the cult’s founder, Aleister Crowley (Macfadyen).

What do you think? Which season two episodes of the Strange Angel TV series do you rate as wonderful, terrible, or somewhere between? Should CBS All Access cancel or renew Strange Angel for a third season? Don’t forget to vote, and share your thoughts, below.