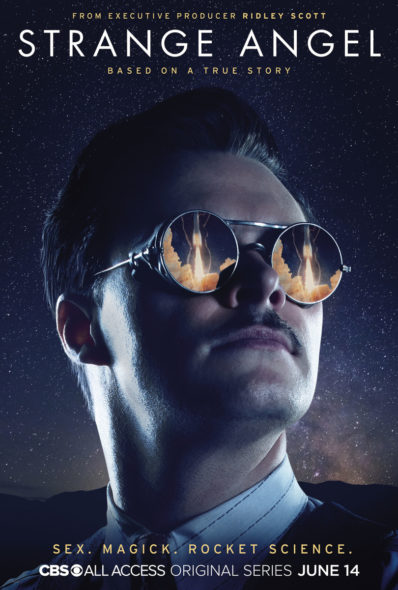 What do you think of Jack Parsons during the first season of the Strange Angel TV show on CBS All Access? As we all know, the Nielsen ratings typically play a big role in determining whether TV shows are cancelled or renewed. CBS All Access and other streaming platforms, however, collect their own data. If you’ve been watching this TV series, we’d love to know how you feel about the Strange Angel season one episodes. We invite you to rate them for us here.

A CBS All Access drama, Strange Angel stars Jack Reynor, Rupert Friend, Bella Heathcote, Peter Mark Kendall, Michael Gaston, Greg Wise, Rade Šerbedžija, Zack Pearlman, and Keye Chen. Based on the book by George Pendle, the series is inspired by the true story of blue-collar worker Jack Parsons (Reynor) and his experiences in the worlds of science, science fiction, and the occult. In 1930s Los Angeles, Jack is a chemical factory janitor but has aspirations of one day building rockets that can transport people to the moon. During the day, he devotes himself to nascent rocket science. Meanwhile, at night, he is drawn to Aleister Crowley’s religion and sex magick rituals.

What do you think? Which season one episodes of the Strange Angel TV series do you rate as wonderful, terrible, or somewhere between? Should CBS All Access cancel or renew Strange Angel for a second season? Don’t forget to vote, and share your thoughts, below.

Excellent show! Really well done. I loved watching the life and times of this interesting, historical figure captured with such wonderful detail. PLEASE RENEW!! I have to see what happens next!