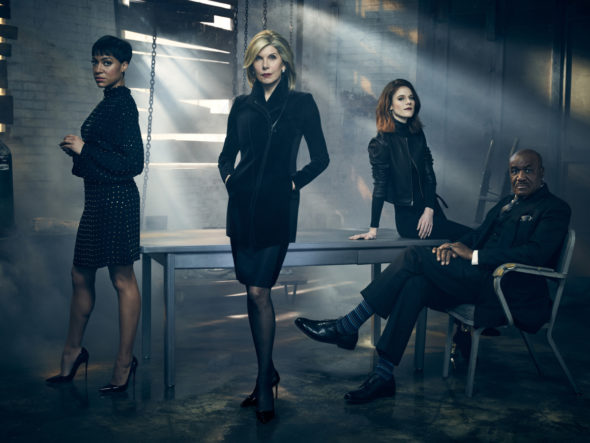 Is Diane Lockhart down for the count? Has The Good Fight TV show been cancelled or renewed for a fourth season on CBS All Access? The television vulture is watching all the latest TV cancellation and renewal news, so this page is the place to track the status of The Good Fight, season four. Bookmark it, or subscribe for the latest updates. Remember, the television vulture is watching your shows. Are you?

A CBS All Access TV series, The Good Fight stars Christine Baranski, Cush Jumbo, Rose Leslie, Delroy Lindo, Audra McDonald, Sarah Steele, Michael Boatman, Nyambi Nyambi, and Michael Sheen. A sequel to The Good Wife, the legal and political drama centers on Diane Lockhart (Baranski), her goddaughter Maia Rindell (Leslie), and Lucca Quinn (Jumbo). In season three, the resistance is going crazy, while lawyers with the best narratives triumph over those with the facts on their side.

Unless they decide to publicize viewership, it is difficult to predict whether CBS All Access will cancel or renew The Good Fight for season four. However, along with Star Trek: Discovery it’s one of the subscription streamer’s few big series, and they have a multi-season deal with Amazon for the international market, so I suspect it will be renewed. I’ll keep an eye on the trades and press releases, and update this page with breaking developments. Subscribe for free alerts on The Good Fight cancellation or renewal news.

4/23/19 update: The Good Fight has been renewed for a fourth season on CBS All Access.

What do you think? Are you glad that The Good Fight TV show has been renewed for a fourth season? How long do you expect this CBS All Access TV series to last?

In my opinion there is not a lot to watch on TV , but The Good Fight , has me wanting more and waiting for the next one . I hope this show has a very long run, if it gets cancelled it will make me very sad, I will have to go back to looking on NETFLIX for a movie.

I loved the Good Wife and have long anticipated the Good Fight being brought to DVD. I hope it has a long run too.

M K
I love this show! Although political biases are a part of much of life, I am not pleased with not having any positive conservative or Republican themes shown. I’ve seen only one Republican lawyer shown in the firm. I consider myself an independent or a swing voter, but I like balance in my entertainment.

I was hoping the show gets cancelled. I was enjoying the show, until it started in on Political themes. I don’t watch TV shows to hear their Political biases. Lost this viewer forever

An outstanding spinoff to Good Wife which I also thoroughly enjoyed. Suspense, humor, politics told in a non-offensive way (OK, Trump takes a few lickings) what’s not to love???