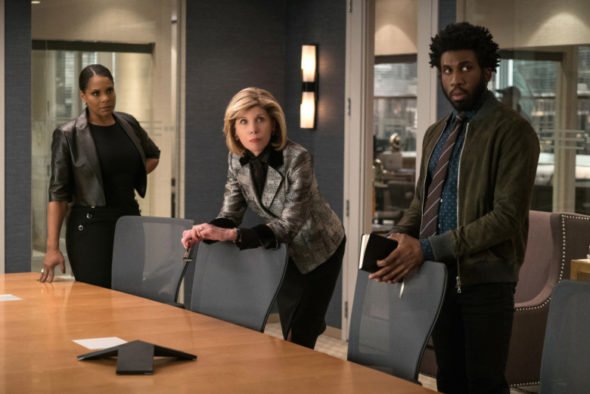 CBS All Access is keeping the fight alive! The streaming just announced they’ve renewed The Good Fight for a fourth season.

The season three finale of The Good Fight is set to debut on CBS All Access on May 16th. For more info, see below:

“THE GOOD FIGHT is in the middle of an incredible third season and continues to be a flagship original series for the service,” said Julie McNamara, Executive Vice President, Original Content, CBS All Access. “Its visionary creators Robert and Michelle King and the extraordinary cast continue to explore the cultural climate with insight, humor and courage, and we can’t wait to see where these indelible characters go next.”

The entire first and second seasons of THE GOOD FIGHT are currently available to stream on CBS All Access. The first six episodes of the third season are also available, with new episodes of THE GOOD FIGHT’s third season dropping weekly on Thursdays, exclusively for CBS All Access subscribers. The season three finale will be available to stream on Thursday, May 16.

The world went crazy in the THE GOOD FIGHT’s second season, and now, in season three, the resistance does. Diane Lockhart tries to figure out whether you can resist a crazy administration without going crazy yourself, while Adrian Boseman and Liz Reddick-Lawrence struggle with a new post-factual world where the lawyer who tells the best story triumphs over the lawyer with the best facts. Meanwhile, Lucca Quinn balances a new baby with a new love, and Maia Rindell finds a new Mephistopheles in Roland Blum, a lawyer who is corruption incarnate.

What do you think? Do you watch The Good Fight? Are you glad it’s coming back?

I just love that show, especially all those different characters

I was a fan during season 1. I loved the Good Wife. I liked season 2 as well. I didn’t care for much of season 3 especially the cartoons and the Blum story line. I like Mia and Lucca characters a lot. Marissa is good too—so is the man investigator whose name I’ve forgotten.

I really enjoy The Good Fight” immensely, and am glad we’ll see a season 4. I see Michael Sheen is headlining in a new show, so I assume he won’t return, a good thing, IMHO, his character was a bit too “out there” for me.
Intelligent writing, a superb cast and acting make it one of the best shows out there, worthy of my $9.95 per month ( no commercials!).

Hooray!!! I’m so excited. Love this show. Not so much for the schoolhouse rock sort of thing though. I agree the case is amazing.

I’m thrilled The Good Gight is coming back for a fourth season!!!
It’s just a terrific show! I love each of the characters.It’s an intelligent, funny and captivating show!!!
What a stellar cast and excellent writing.

I love every second of this “legal” drama. The political “twist” is just hilarious. Funny but also serious characters. 10/10!