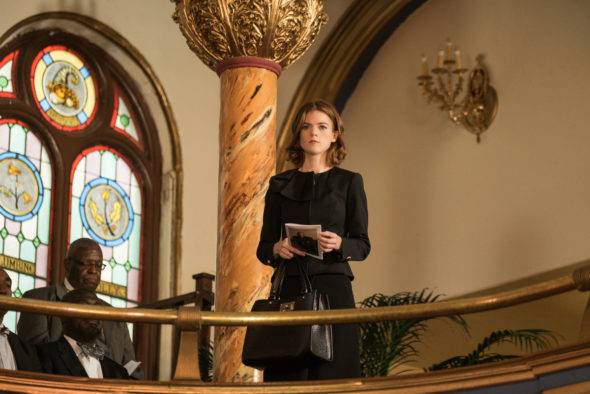 Are Maia, Diane, and Lucca still going to the mat? Has The Good Fight TV show been cancelled or renewed for a third season on CBS All Access? The television vulture is watching all the latest TV cancellation and renewal news, so this page is the place to track the status of The Good Fight, season three. Bookmark it, or subscribe for the latest updates. Remember, the television vulture is watching your shows. Are you?

A CBS All Access TV series, The Good Fight stars Christine Baranski, Cush Jumbo, Rose Leslie, Delroy Lindo, Audra McDonald, Sarah Steele, Justin Bartha, Michael Boatman, and Nyambi Nyambi. A sequel to The Good Wife, the legal and political drama centers on Diane Lockhart (Baranski), her goddaughter Maia Rindell (Leslie), and Lucca Quinn (Jumbo). When a client at another firm kills his lawyer for over-charging, it inspires a copycat murder. Since Chicago’s murder rate is rising, the firm starts to eye its own clients, with fear and suspicion. Diana goes head to head with Liz Reddick-Lawrence (McDonald), a new partner. Meanwhile, her parents’ scandal has inspired Maia to be a bit tougher, and Lucca returns to someone’s orbit.

Unless they decide to publicize viewership, it is generally hard to predict whether CBS All Access will cancel or renew The Good Fight for season three. However, since CBS has struck a multi-season licensing deal with Amazon, and they’re still trying to establish the CBS All Access paid subscription platform, the smart money is on a third season renewal. Still, I’ll keep an eye on the trades and update this page with breaking developments. Subscribe for free alerts on The Good Fight cancellation or renewal news.

5/2/2018 status update: The Good Fight was renewed for a third season on CBS All Access. Get the details here, while I seek sustenance somewhere else.

What do you think? Are you happy The Good Fight TV show was renewed for season three? How would you feel if CBS All Access had cancelled this TV series, instead?

I am hopeful The Good Fight will be renewed for a third season. Well acted, good storylines. Cases not always concluded in one episode!