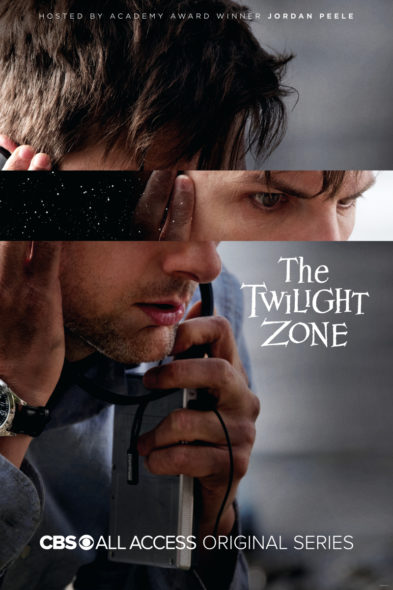 Are there more alternative dimensional travels to come? Has The Twilight Zone TV show been cancelled or renewed for a second season on CBS All Access? The television vulture is watching all the latest TV cancellation and renewal news, so this page is the place to track the status of The Twilight Zone, season two. Bookmark it, or subscribe for the latest updates. Remember, the television vulture is watching your shows. Are you?

A CBS All Access reboot of the Rod Serling sci-fi classic, The Twilight Zone is hosted by Jordan Peele. As an episodic drama anthology, the series presents a new story each week, with different actors. Just like the original, it promises to take viewers “to another dimension, a dimension not only of sight and sound, but of mind.” The weekly stories delve into themes relating to the human race’s hopes, fears, bright spots, and darkest hours, with the goal of promoting social consciousness as it examines the culture.

Unless they decide to publicize viewership, it is hard to predict whether CBS All Access will cancel or renew The Twilight Zone for season two. Flying blind, I predict it will get a second season renewal. I feel a bit like a broken record, but CBS All Access is still building up its programming slate, so they don’t have much of a herd yet to cull. The Twilight Zone benefits from the anthology format. There’s no regular cast, which cuts down on costs. It’s also easier to tweak, when the audience is unhappy.

As an anthology, the show’s barrier to entry is also low for viewers. In addition to its instant name recognition, when people miss an episode, they don’t have to do “homework” (i.e. catch up on missed episodes) before watching a new one. Although CBS All Access is releasing episodes weekly, once the full first season is out, viewers can stream it whenever they want, so they don’t have to schedule their viewing. This smells like the recipe for a season two pickup, to me. Since this is just speculation, I’ll still keep an eye on the trades and update this page with breaking developments, but I’ll be making other dinner plans. Subscribe for free alerts regarding The Twilight Zone cancellation or renewal news.

4/29/19 update: The Twilight Zone has been renewed for a second season on CBS All Access.

What do you think? Are you glad that The Twilight Zone TV show has been renewed for a second season? How would you feel if CBS All Access had cancelled this TV series, instead?

Yup, total garbage. I tried to watch a few episodes, but could only manage to watch a few minutes into each one. Got annoyed and turned it off. Great actors…. how about keeping politics out?

Agree with Betty. Pretty awful, unless you like being preached at. Nothing to like here. Should have been cancelled.