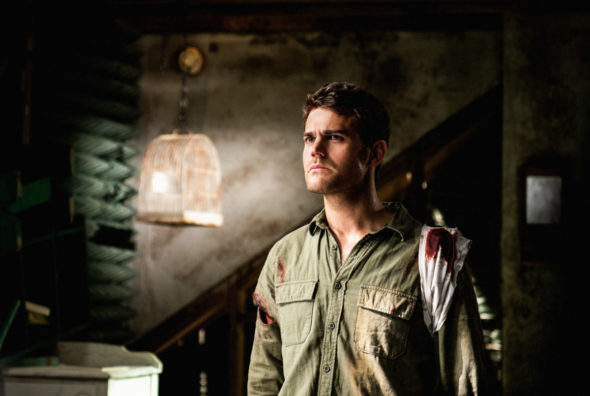 The CW has picked up some existing series for the network’s schedule, in case the coronavirus keeps production shut down for a longer period. Swamp Thing, Tell Me a Story, Coroner, and Dead Pixels are all coming to the network. At this point, none of the shows are being put back into production.

American viewers may recall that Swamp Thing ran for one season on the DC Universe streaming service in 2019 before being cancelled. Tell Me a Story ran for two seasons and was just cancelled by CBS All Access.

The CW revealed the following about the pickups in a press release.

“Adding to its growing roster of scripted programming, The CW Network announced today the acquisition of four scripted series for broadcast and its free ad-supported streaming platforms, including SWAMP THING, based on the iconic DC character; the investigative drama CORONER; the dark, re-imagined fairy tale series TELL ME A STORY, and the half-hour British comedy DEAD PIXELS from BBC Studios.

SWAMP THING (one season) and TELL ME A STORY (two seasons) will make their network television debuts on The CW Network and stream for the first time on The CW’s free, ad-supported digital platforms. Hailing from Canada and the U.K. respectively, CORONER (two seasons) and DEAD PIXELS (one season) will each be making their U.S. debuts on The CW and its digital platforms. Premiere dates and times will be announced later.”

What do you think? Are you going to check out these shows on The CW? Have you watched any of them before?

Thats cool, this is a bit weird because about 2 months ago i was talking to a friend about swamp thing and that i knew it was going to get cancelled when the first season appeared on tv and then i read this about cw may pick it up , i swear they be listening in on ppl conversations believe it or not!

only the done season
Reply to  Michelle

not “picked up” to be an ongoing series, just to show the 1 season that was done, DOUBT it will be put back into production

Definitely, love Tell Me A Story, so I was really happy to read that it was picked up by the CW. And Swamp Thing looks like a great addition to the CW family

not “picked up” to be an ongoing series, just to show the seasons that was done, DOUBT it will be put back into production

Michelle U
Reply to  Christa

So sad that “Tell Me A Story” was cancelled by the pay platform CBS All Access, but glad that CW will be rebroadcasting & streaming the two seasons for free. It’s more of a CW audience show anyway. Maybe, like “Supergirl,” it belongs at CW and they may pick it up after CBS cancelled it?!!!???! Wishful thinking. It was a great show, just on the wrong network. (I know CBS owns CW, but CW has a strong audience for a show like “Tell Me A Story!”)