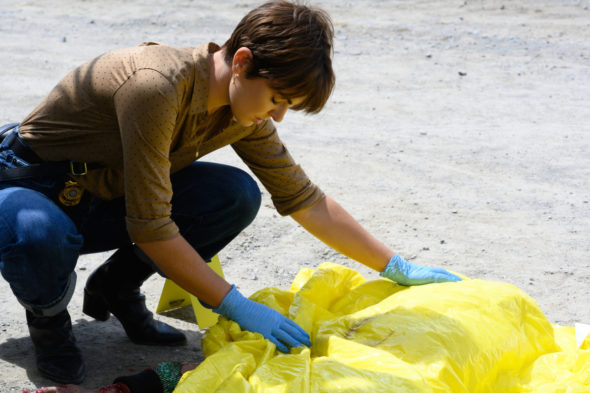 Can Jenny find happiness with a new mate? Has the Coroner TV show been cancelled or renewed for a third season on The CW? The television vulture is watching all the latest cancellation and renewal news, so this page is the place to track the status of Coroner, season three. Bookmark it, or subscribe for the latest updates. Remember, the television vulture is watching your shows. Are you?

The second season of Coroner averaged a 0.10 rating in the 18-49 demographic and 686,000 viewers. Compared to season one, that’s even in the demo and down by 3% in viewership. Find out how Coroner stacks up against other The CW TV shows.

Will The CW cancel or renew the Coroner TV show? The drama series originates on CBC in Canada where a third season has already been ordered. I’m guessing it doesn’t cost CW much to license it so I think the network will air season three sometime in 2021. I’ll update this page with breaking developments. Subscribe for free alerts on Coroner cancellation or renewal news.

What do you think? Are you glad that the Coroner TV show has been renewed for a third season on The CW? Would you have been upset if the series had been cancelled, instead?

Season 3 starts in a week or two. I just set it on our DVR.

Not anymore. 1st episode Season 3 turned me off the series for good. Opening scene has radio program playing a WHO tribute to the job Canada is doing to fight COVID. WTF? When you politisize a Drama it is known as PROPAGANDA. Yet anohther good reason to defund the CBC.

Oh, please. The thing turned into the soap opera to end all soap operas. She’s a reformer who is going to to sort out the mess created by the incompetence of her predecessor, despite her own competence being just a wee trifle in doubt because she’s medicated to the freaking eyebrows. Because of past trauma, of course. And in case that’s not enough, she collects a lover who’s also traumatized with a best friend who’s also traumatized, and the writers threw in a father with Alzheimer’s as well, just in case we hadn’t yet noticed the “I am VICTIM” on… Read more »