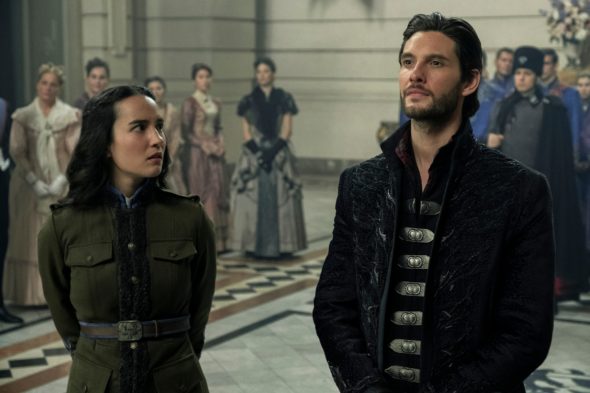 Are Alina’s allies who they appear to be in the first season of the Shadow and Bone TV show on Netflix? As we all know, the Nielsen ratings typically play a big role in determining whether a TV show like Shadow and Bone is cancelled or renewed for season two. Netflix and other streaming platforms, however, collect their own data. If you’ve been watching this TV series, we’d love to know how you feel about the first season episodes of Shadow and Bone here.  *Status Update Below.

A Netflix fantasy series, the Shadow and Bone TV show stars Jessie Mei Li, Archie Renaux, Freddy Carter, Amita Suman, Kit Young, and Ben Barnes. Based on Leigh Bardugo’s Grishaverse novels, the story finds us in a war-torn world where a lowly soldier and orphan, Alina Starkov (Mei), has just unleashed an extraordinary power that could be the key to setting her country free. With the monstrous threat of the Shadow Fold looming, Alina is torn from everything she knows to train as part of an elite army of magical soldiers known as Grisha. But as she struggles to hone her power, she finds that allies and enemies can be one and the same and that nothing in this lavish world is what it seems.

What do you think? Which season one episodes of the Shadow and Bone TV series do you rate as wonderful, terrible, or somewhere between? Do you think that Shadow and Bone on Netflix should be cancelled or renewed for a second season? Don’t forget to vote, and share your thoughts, below.

*6/8/2021 update: Shadow and Bone has been renewed for a second season on Netflix.

I loved this new fantasy series on Netflix. The only bone I have to pick is the gratuitous sex scene. It’s not the homosexual part of it that bothered me, heck I’m bothered by explicit hetero sex scenes in any fantasy piece. To me, they detract from the story and degrade what should be a sacred and private act and don’t belong in an action/adventure genre.