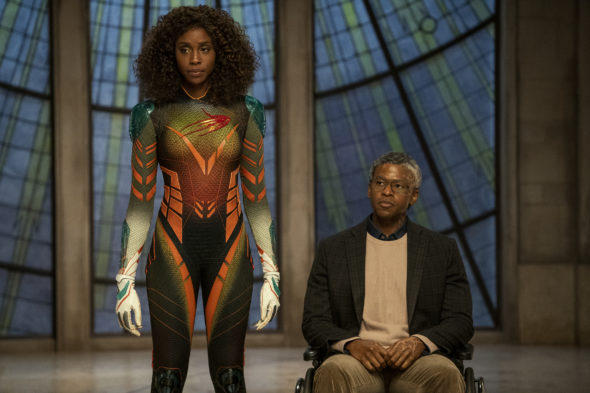 Is the original generation truly ready to give up the spotlight in the first season of the Jupiter’s Legacy TV show on Netflix? As we all know, the Nielsen ratings typically play a big role in determining whether a TV show like Jupiter’s Legacy is cancelled or renewed for season two. Netflix and other streaming platforms, however, collect their own data. If you’ve been watching this TV series, we’d love to know how you feel about the first season episodes of Jupiter’s Legacy here.  *Status Update Below.

A Netflix superhero drama series, the Jupiter’s Legacy TV show is based on the Image comic book series by Mark Millar and Frank Quitely. The show stars Josh Duhamel, Leslie Bibb, Ben Daniels, Elena Kampouris, Andrew Horton, Mike Wade, Matt Lanter, and Ian Quinlan. After nearly a century of keeping mankind safe, the world’s first generation of superheroes must look to their children to continue the legacy. But tensions rise as the young superheroes — hungry to prove their worth — struggle to live up to their parents’ legendary public reputations and very strict personal standards. The story spans decades and navigates the complex dynamics of family, power, and loyalty.

What do you think? Which season one episodes of the Jupiter’s Legacy TV series do you rate as wonderful, terrible, or somewhere between? Do you think that Jupiter’s Legacy on Netflix should be cancelled or renewed for a second season? Don’t forget to vote, and share your thoughts, below.

I wish I could convince them to change their minds about this one. I really enjoyed it. It was actually entertaining and one of those shows where you’re looking forward to the next episode.

I enjoyed this first season and I was looking forward to seeing the next. I wanted to get to know the characters a little better in the next season. Sorry to hear they canceled it.

This show was so bad in so many ways. Pity they didn’t play it for laughs it might have been more watchable.

I’m skeptical of the show, though my wife and I are enjoying it. Netflix cancels way too quickly so we really dont jump into shows that have just started.

This show is amazing. Kinda of reminds me of hero’s

This shows is great, i loved it. Too bad people are accustomed to other type of heroe shows or movies like Marvel.

We be only people who feel this way but it’s dull.