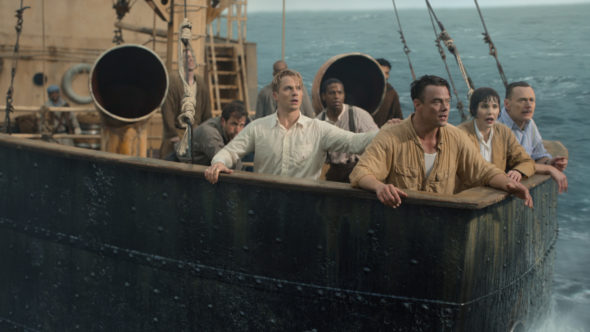 Will the kids outshine the parents? Has the Jupiter’s Legacy TV show been cancelled or renewed for a second season on Netflix? The television vulture is watching all the latest cancellation and renewal news, so this page is the place to track the status of Jupiter’s Legacy, season two. Bookmark it, or subscribe for the latest updates. Remember, the television vulture is watching your shows. Are you?

Streaming on the Netflix subscription service, the Jupiter’s Legacy TV show is based on the Image comic book series by Mark Millar and Frank Quitely. The show stars Josh Duhamel, Leslie Bibb, Ben Daniels, Elena Kampouris, Andrew Horton, Mike Wade, Matt Lanter, and Ian Quinlan. After nearly a century of keeping mankind safe, the world’s first generation of superheroes must look to their children to continue the legacy. But tensions rise as the young superheroes — hungry to prove their worth — struggle to live up to their parents’ legendary public reputations and very strict personal standards. The story spans decades and navigates the complex dynamics of family, power, and loyalty.

Unless they decide to publicize viewership, it is difficult to predict whether Netflix will cancel or renew Jupiter’s Legacy for season two. Since Netflix isn’t ad-supported, it can take a chance on series it believes in, but sooner or later it comes down to production costs, versus viewership numbers. Given that the public continues to have an appetite for superhero movies and shows, a second season renewal seems like a sure thing. Generally speaking, Netflix TV shows which are going to be renewed are usually picked up within a month or so of the series or season premiere. I’ll keep my ears open and an eye out for news and will update this page with breaking developments. Subscribe for free alerts on Jupiter’s Legacy cancellation or renewal news.

6/3/2021 update: Jupiter’s Legacy has been cancelled by Netflix.

What do you think? Were you hoping that the Jupiter’s Legacy TV show would be renewed for a second season? Are you sorry that Netflix cancelled this TV series, instead?

Whilst its serious approach is perhaps less “watchable” than The Boys on Prime, there is an interesting story there. I hope that they commission second season