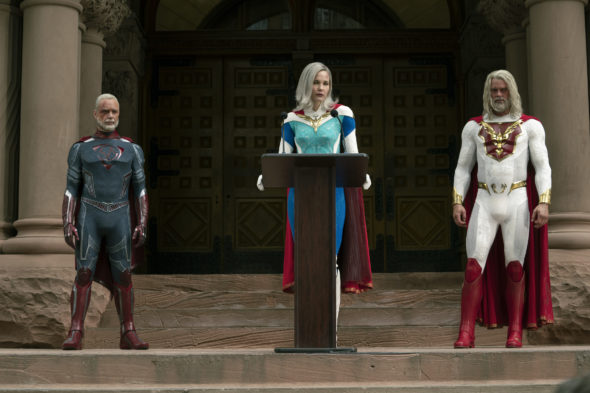 Netflix has grounded another TV show. The streaming service has cancelled the Jupiter’s Legacy series so there won’t be a second season. The first season was released less than a month ago.

A superhero drama series, the Jupiter’s Legacy TV show is based on the Image comic book series by Mark Millar and Frank Quitely. The show stars Josh Duhamel, Leslie Bibb, Ben Daniels, Elena Kampouris, Andrew Horton, Mike Wade, Matt Lanter, and Ian Quinlan. After nearly a century of keeping mankind safe, the world’s first generation of superheroes must look to their children to continue the legacy. But tensions rise as the young superheroes — hungry to prove their worth — struggle to live up to their parents’ legendary public reputations and very strict personal standards. The story spans decades and navigates the complex dynamics of family, power, and loyalty.

Comic creator Mark Millar broke the news of the cancellation via Twitter. He said, “I’m really proud of what the team achieved with Jupiter’s Legacy and the amazing work everyone did on that origin season.” While Jupiter’s Legacy won’t be continuing, Millar is “confident we’ll return to it later and just want to say thanks to you guys for your continued support and to the cast and crew who made this look great.” He also noted that he is working on a live-action adaptation of Supercrooks which takes place in the world as Jupiter’s Legacy but focuses on villains.

Some big news from us on what's coming up next in live-action from Millarworld, peeps! pic.twitter.com/usEuwVNHei

What do you think? Did you watch the Jupiter’s Legacy TV series? Are you disappointed that there won’t be a second season?

This was an awesome showing really upset to hear its been canceled before it got a chance to get an audience. I hope one of the other networks are smart and pick it up, I think it is a sleeper. I believe the difference is presenting a flawed superhero it’s a pretty unique idea. Most of the shows today are rehashed from old previous shows because the writers today have no new imagination. Anytime a new show comes out with a different look or different Viewpoint they never give it a chance to catch on its hacked. Sad for the… Read more »

It was very depressing to watch. It looked like everyone was in a major bummer.

Yet somehow, Good Girls continues to remain as a series.

Thanks Netflix. I was looking forward to checking this show out. However since you cancelled it I won’t even bother. How about giving your shows a chance to find an audience?

I quite enjoyed the first season of Jupiter’s Legacy. I don’t understand not renewing it. It was showing what struggles real heroes go through to do the right thing in situations that would cause most people to do the easy thing. Even if it is basically the wrong thing.

While I have seen better series than Jupiter’s Legacy, there are many series that are/were worse. And from the two story lines told in season 1, only one ends a bit on a slow note. The other story line is more than entertaining enough to warrant another season or two.

This is it for me and Netflix im so sick of loving content they create only to have them yank out the rug from under everyone after only 1 season. Cancel great shows fine we will cancel you to there are other streaming platforms out there goodbye netflix

I’ve enjoyed what I have seen about it so far. Maybe they should have promoted it better because as someone who enjoys this sort of show I wasn’t even aware it was being made until less than a month before it was released.

Cause I’ve canceled my subscription almost half year ago.

Oh wow. I thought about watching it even though I heard it wasn’t great. I saw the ad for it on YouTube a million times. That was quick. It’s like ABC or FOX cancelling a show.

Same here. It only was released last month. One of the things Netflix looks at is if people watch a complete season once they begin watching. I suspect there were a significant amount of people who watched a few episodes and moved to something else.

Yeah, I wondered how Netflix decide how/when to cancel their shows. I have never watched Jupiter Legacy because it just looked too silly. I also start watching movies/series than stop because I became tired of it. My favorite still on Netflix is The Old Guard (Charlize Theron) (2020). I have watched it a bunch of times. I have my fingers crossed there will be The Old Guard 2 soon