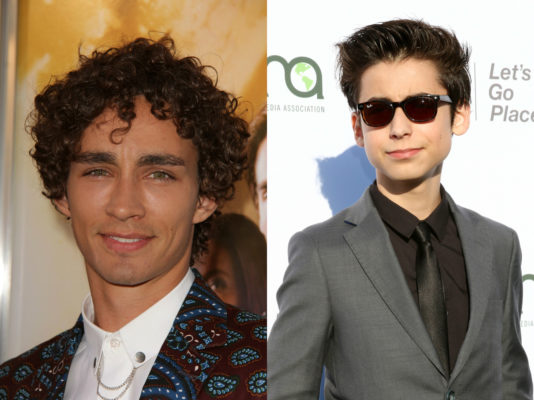 Based on the graphic novels by Gerard Way and Gabriel Bá, the live-action drama “follows the estranged members of a dysfunctional family of superheroes known as the Umbrella Academy — Luther, Diego, Allison, Vanya, Klaus and Number Five — as they work together to solve their father’s mysterious death while coming apart at the seams due to their divergent personalities and abilities.”

The Netflix original series The Umbrella Academy is adding more members. Based on the popular, Eisner award-winning comics and graphic novels created and written by Gerard Way (My Chemical Romance), illustrated by Gabriel B�, and published by Dark Horse Comics, the series is adding cast members Tom Hopper as “Luther,” Emmy Raver-Lampman as “Allison,” David Castañeda as “Diego,” Robert Sheehan as “Klaus,” and Aidan Gallagher as “Number Five.”

The live action series follows the estranged members of a dysfunctional family of superheroes (The Umbrella Academy) – Luther, Diego, Allison, Vanya, Klaus and Number Five – as they work together to solve their father Reginald Hardgraves’ mysterious death, while coming apart at the seams due to their divergent personalities and abilities.

The Umbrella Academy will be produced by Universal Cable Productions. Steve Blackman (Fargo, Altered Carbon) will serve as executive producer and showrunner, with additional executive producers Bluegrass Television and Mike Richardson and Keith Goldberg from Dark Horse Entertainment. Gerard Way will serve as co-executive producer. The pilot script was adapted from the comic book series by Jeremy Slater (The Exorcist).

“Luther” was groomed by his father from an early age to be the leader of The Umbrella Academy – a responsibility that has always weighed heavily on him. He is resilient, a workaholic, and possesses the ability of heightened physical strength. Upstanding to a fault, Luther always tries to do the right thing, even if that means putting others before himself.

Hopper just wrapped shooting a starring role opposite Amy Schumer and Michelle Williams in Voltage/STX’s comedy I Feel Pretty, written and directed by Abby Kohn and Marc Silverstein. Most recently, he played “Dickon Tarly” in Season 7 of HBO’s explosive hit series Game Of Thrones. Hopper also starred as “Billy Bones” in Starz’s Black Sails, produced by Michael Bay, and has appeared in numerous other television series and film projects over his career including Netflix’s Kill Ratio, The History Channel’s event series Barbarians Rising, and the hit TV series Merlin for BBC1/Syfy Channel.

“Allison” is beautiful, elegant, and a formerly world-famous movie star who possesses the power of suggestion – anything she says aloud comes to pass. Her life seems perfect from the outside, but her ability has undermined every relationship she’s ever had. With her career on the decline and her marriage in shambles, she refuses to use her power as she seeks a more authentic life.

Emmy Raver-Lampman is the breakout star of the 1st National Touring Company of the Tony-winning phenomenon, Hamilton. After being a part of the original Ensemble on Broadway, Emmy was promoted to the coveted role of “Angelica Schuyler” for the West Coast run. Previous Broadway credits include Jekyll & Hyde, Hair and the National Touring Company of Wicked. The Umbrella Academy marks her very first television role.

“Diego” is a skilled, intense vigilante who has a real problem with authority. He isn’t as naturally strong or smart as his siblings, so he’s worked three times as hard for everything. Believing he should have been the leader of his family instead of his brother, he carries a massive chip on his shoulder that makes him hostile to just about everyone.

David Castañeda is currently shooting the Billy Crystal/Ben Schwartz comedy, “We Are Unsatisfied.” His recent work includes a lead role in the independent feature “El Chicano,” opposite Raul Castillo and George Lopez. He also stars alongside Benicio Del Torro and Josh Brolin in Lionsgate’s forthcoming “Soldado,” the sequel to the smash hit “Sicario.”

“Number Five” appears to be a thirteen year old boy, but in actuality he is a fifty-eight-year-old man trapped in the body of a child. He doesn’t suffer fools and is the smartest person in the room. He’s haunted by the things he’s seen and done, and is on the verge of losing his grip on reality.

“Klaus” is a drug addict and lovable mess of a human being and yet, if you ask him, any day now his life is going to turn around. He’s a classic “middle child” – a disarming pleaser who is seemingly everyone’s friend, but will rob you blind without thinking twice.

Robert Sheehan (Misfits) next transforms into an East European, non-gender specific character in Mute on Netflix, the second part of a planned trilogy from writer/director Duncan Jones that began with Moon. Next year, Sheeha also stars opposite David Tennant in Dean Devlin’s thriller Bad Samaritan. In December, he’ll star in Christian Rivers’ Mortal Engines, a sci-fi/fantasy movie co-written and produced by Peter Jackson. For television, Sheehan is currently shooting the second season of Genius (National Geographic), which chronicles the life and work of Picasso.”

What do you think? Are you familiar with the Umbrella Academy comics? Will you watch the TV series?