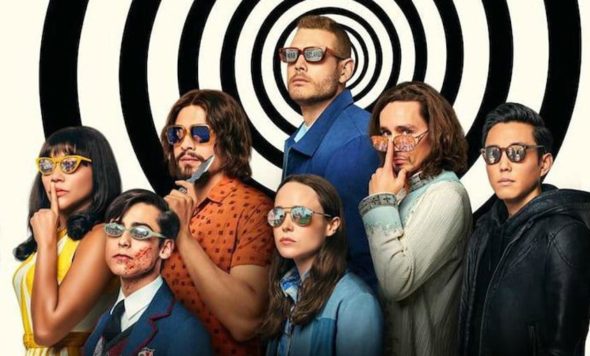 Can the siblings return to the present in time? Has The Umbrella Academy TV show been cancelled or renewed for a third season on Netflix? The television vulture is watching all the latest cancellation and renewal news, so this page is the place to track the status of The Umbrella Academy, season three. Bookmark it, or subscribe for the latest updates. Remember, the television vulture is watching your shows. Are you?

Streaming on the Netflix subscription service, The Umbrella Academy stars Ellen Page, Tom Hopper, David Castañeda, Emmy Raver-Lampman, Robert Sheehan, Aidan Gallagher, Justin H. Min, Colm Feore, Adam Godley, Ritu Arya, Yusuf Gatewood, Marin Ireland, and Kate Walsh. The mystery comedy-drama centers on an unusual group of people adopted by Sir Reginald Hargreeves (Feore) and trained to save the world at his school, The Umbrella Academy. All grown up, they reunite to solve the mystery behind Sir Reginald’s death and stave off a global apocalypse. In the second season, the siblings have been scattered in time, back to 1960s Dallas. They must find a way to reunite, figure out what’s caused a nuclear doomsday, stop it, and return to the present timeline — all while being hunted by a trio of ruthless Swedish assassins.

Unless they decide to publicize viewership, it is difficult to predict whether Netflix will cancel or renew The Umbrella Academy for season three. Since Netflix isn’t ad-supported, it can take a chance on series but, sooner or later, it comes down to production costs, versus viewership numbers. Generally speaking, Netflix TV shows which are going to be renewed are usually picked up within a month or so of a season premiere. I’ll keep my ears open and an eye out for news, and will update this page with breaking developments. Subscribe for free alerts on The Umbrella Academy cancellation or renewal news.

11/11/20 update: The Umbrella Academy has been renewed for a third season.

What do you think? Are you glad The Umbrella Academy TV show has been renewed for a third season? How would you feel if Netflix cancelled this TV series, instead?

I watched both seasons over a weekend and although initially entertaining I groaned when season 2 ended with them once again saving the world from apocalypse but finding their own reality altered so they have to “start over”. If season 3 is just another story arc where they spend the entire season saving the world only to find they have to start over again just makes for “same stuff, different season”. If season 3 is just another rehash of he first two seasons it should cancelled.