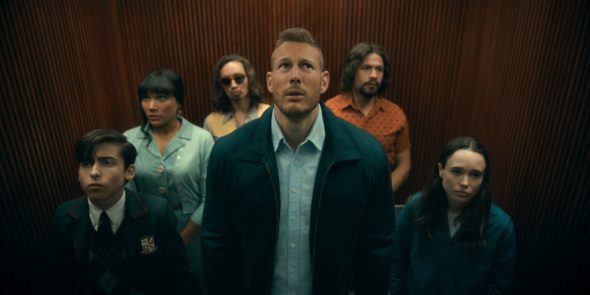 The Umbrella Academy will continue its story. The series has been renewed for a third season. Season two premiered at the end of July on Netflix.

Ellen Page, Tom Hopper, David Castañeda, Emmy Raver-Lampman, Robert Sheehan, Aidan Gallagher, Justin H. Min, Colm Feore, Adam Godley, Ritu Arya, Yusuf Gatewood, Marin Ireland, and Kate Walsh star in the series which follows a group of seven, all born on the same day. Each of them has their own special abilities. At the end of season two, six of the group find themselves in an entirely new reality after a time jump.

They’re not done yet!

The streaming service does not reveal ratings for their shows, but The Umbrella Academy scored a 9.47 average in our on-site viewer voting.

What do you think? Are you excited to see more of The Umbrella Academy on Netflix?

This show keeps getting better and better with each episode. Can’t wait for season 3 I’m 62 and love this