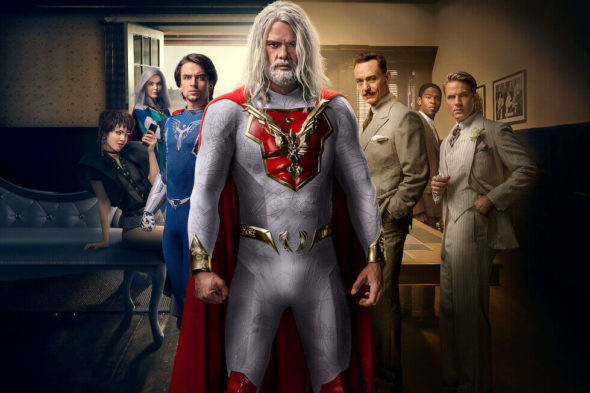 TV show description:
A superhero drama series, the Jupiter’s Legacy TV show is based on the Image comic book series by Mark Millar and Frank Quitely.

After nearly a century of keeping mankind safe, the world’s first generation of superheroes must look to their children to continue the legacy. But tensions rise as the young superheroes — hungry to prove their worth — struggle to live up to their parents’ legendary public reputations — and very strict personal standards.

The story spans decades and navigates the complex dynamics of family, power, and loyalty.

Sheldon Sampson (Duhamel) aka The Utopian is the storied leader of the superhero team The Union. But times have changed, and he doesn’t understand the world we live in anymore — or his own family.

Sheldon’s older brother, Walter (Daniels) aka Brain-Wave, is a man of vast intellect and cunning who, unlike Sheldon, isn’t afraid to get his hands dirty — or bloody.

Sheldon’s wife, Grace (Bibb) aka Lady Liberty, is one of the most powerful heroes on the planet. She doesn’t always agree with Sheldon, but strives to balance his ideals with the reality of the modern (often violent) world they live in.

Grace and Sheldon’s son, Brandon (Horton), is in training to assume the mantle of The Utopian and become the new leader of The Union. He struggles to live up to his father’s mythic legend.

Fitz Small (Wade) aka The Flare is the heart and soul of The Union. Despite suffering injuries that ended his career as a superhero, he continues to be one of the most valued members of the team — and is often the only thing holding them together in the face of an increasingly hostile world.

George Hutchence (Lanter) aka Skyfox was Sheldon’s closest friend and ally before turning against him and the rest of his teammates in The Union. Now considered the greatest supervillain in the world, George plots his revenge on the teammates he believes betrayed him.

Series Finale:
Episode #8 — How It All Ends
As Walter’s situation grows dire, Sheldon and Brandon join forces in a do-or-die showdown with a supervillain. Hutch runs into trouble during a heist.
First aired: May 7, 2021.

What do you think? Do you like the Jupiter’s Legacy TV show? Do you think it should have been cancelled or renewed for a second season?

Bummer! I was looking forward to season two of this as I thought it was starting to get really good towards the end of the first season.

How come you guys cancel your best shows. You left us on a major cliff hanger, soon we will not trust you knowing that your just gonna leave us hanging.

This was a great show. So much better than others that don’t get canceled. What’s the point of watching any new series anymore?

I really like the show. I hope they don’t cancel it . It’s not the best show compared to superman, batman, wonder woman the avengers ect.. but I enjoyed it